These are disorienting times, as a parade of women spills forth the secrets and lies they have been porting in private, some for decades. Stories rife with shame, collusion, dominance, desperation all tap distressing emotions. Upside-down post-feminist realities careen, as well, through the fantasy portraits of Los Angeles artist Deirdre Sullivan-Beeman.

In the highly theatrically portraits of porcelain-skinned girls, the artist uses a modified oil and egg tempera technique of the 14th century Old Masters to create works of magical realism that appear to glow from within. She is resurrecting the time-intensive egg tempera medium in  dreamlike paintings, while reminding audiences of the archaic medium’s mysterious sense of illumination.

The young, hauntingly innocent, and teetering on the edge of naïveté get her attention. Sounds like the visitors to Harvey Weinstein’s Peninsula Hotel suite in the ’90s. 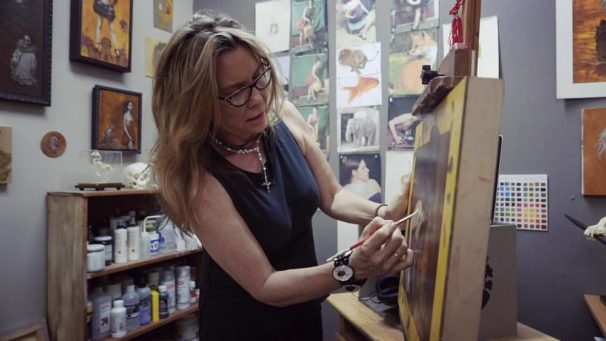 In an artistic statement, Sullivan-Beeman notes that, “Today’s girl is an emerging phenomenon.” 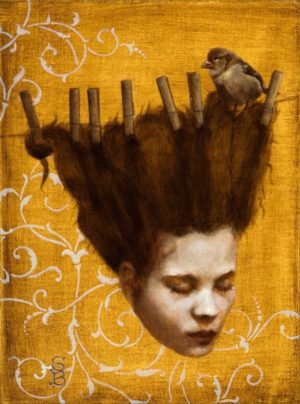 “What is her secret ingredient? It’s not only about being treated equally, it’s about being strong, present — a ‘wonder woman.’ The powerful femininity arising now is a direct translation of the yin energy that I idolize.”

Sullivan-Beeman has shown in a group exhibition at Merino Bottega D’arte in Florence, Italy, and at the Life Is Beautiful Music and Art Festival in Las Vegas (That is the festival that recently narrowly escaped a horrific violent fate.)

Jung’s collective unconscious with an overt curiosity for the bizarre and the esoteric, especially alchemy and the tarot drive her creative exploration. The artist is based in Los Angeles and has a studio in Vancouver.