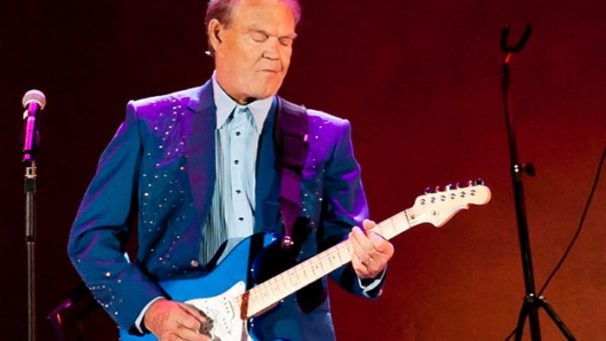 editor’s note: Guest writer Richard Ginell contributes a Daily Variety review (published June 24, 2012) of the final concert at the Hollywood Bowl by Glen Campbell (1936 – 2017). One correction; “Ghost On The Canvas” would not be his last album; two more were to follow.

Glen Campbell said his farewell as a performer to Los Angeles – the city where he broke into the studios as a member of the Wrecking Crew a half-century ago – at the Hollywood Bowl Sunday night. With all of the publicity about Campbell’s revelation that he is suffering from Alzheimer’s disease and his determination to carry on with one last tour anyway, it might have been an occasion for sadness. But no, the spirit in the air was one of joyousness, even of defiance of the looming darkness. Lovingly supported by an excellent backup band that included three members of his family, and no doubt buoyed by the sense of occasion, Campbell made it through his 70-minute set in generally fine form – and at times, in great form.

Obviously time has altered the makeup of the 76-year-old Campbell’s voice – the high, clear timbre of his youth is now deeper and rougher with a bit of a quaver – yet he can still summon forth the cry in his voice and even a nice yodel in bedrock country material like “I Can’t Stop Loving You” and “Lovesick Blues.” He looked good, moved well, took immediate command of his audience with an electric opening performance of “Gentle On My Mind.” Best of all, his guitar playing sounded unimpaired – fast, funky, with brilliant fills and in-the-pocket extended solos that made it clear that he’s still one of the great pop and country guitarists.

The bulk of the set was devoted to Campbell’s long string of Jimmy Webb-penned classics, the second wind of mid-`70s hits (“Rhinestone Cowboy” and “Southern Nights”), and some attractive material from what looks to be his final record, “Ghost On The Canvas.” The best performance of all was that of “Wichita Lineman” – all cylinders firing – and Campbell’s daughter Ashley (a very gifted banjo player, singer and keyboardist) and sons Shannon (guitar) and Cal (drums) came up with their own closely-harmonized, countrified take on one of Glen’s underrated gems, “Hey, Little One.”

Three onstage TelePrompters helped keep Campbell on track as he roamed the stage – and he conveyed heartbreaking new meaning to a line toward the close of “Galveston” as he spoke the words, “I am so afraid of dying.” The final song, “A Better Place” (from “Ghost”), formed a kind of poignant benediction, but not enough to mask what was, indeed, a celebration.

Alas, much of the well-intentioned opening set by Dawes –little better than a bar band – and a parade of tribute-paying guest stars as fraught with problems (keys set too low for some singers, indifferent covers of records that Campbell played on), though things started to pick up a bit with Kris Kristofferson’s easygoing rendition of Webb’s “Highwayman” and Jenny Lewis’s spunk, peaking with Jackson Browne’s solid performance of his “These Days.”

The Glen Campbell Goodbye Tour continues through several cities in the US – including, of course, Galveston, TX – plus dates in Australia and New Zealand. It will be a long yet inspiring farewell.