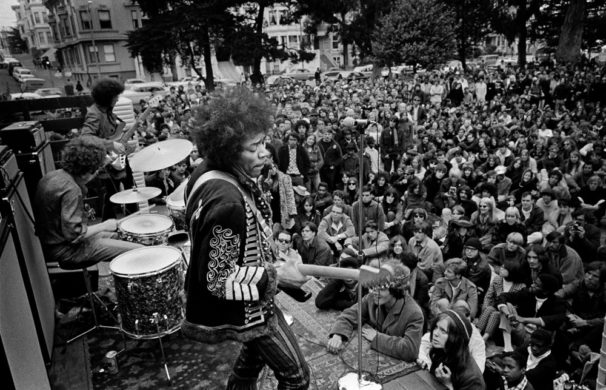 In the photo, the great Jimi Hendrix performs a free concert in the Panhandle, Golden Gate Park, San Francisco, June 1967. This seminal image is among sixty now on view as the GRAMMY Museum celebrates one of the most pivotal years in music — and the photographer who captured it, in Jim Marshall’s 1967.

Jim Marshall (1936–2010) spent his life documenting jazz, folk and then rock & roll, and was living and working in San Francisco when California bands such as Moby Grape, Buffalo Springfield, The Charlatans, Jefferson Airplane, and the Grateful Dead were at the forefront of solidifying a cultural movement that reached its apex in 1967. His photographs have captured iconic and candid portraits of Janis Joplin, Jimi Hendrix, Johnny Cash, Neil Young, Bob Dylan, the Allman Brothers, Led Zeppelin, the Grateful Dead, The Beatles, and countless others.

Organized by The San Francisco Arts Commission in conjunction with the 50th anniversary of San Francisco’s Summer of Love, the exhibition features a selection of images from the thousands Jim Marshall took that culture-changing summer in San Francisco.