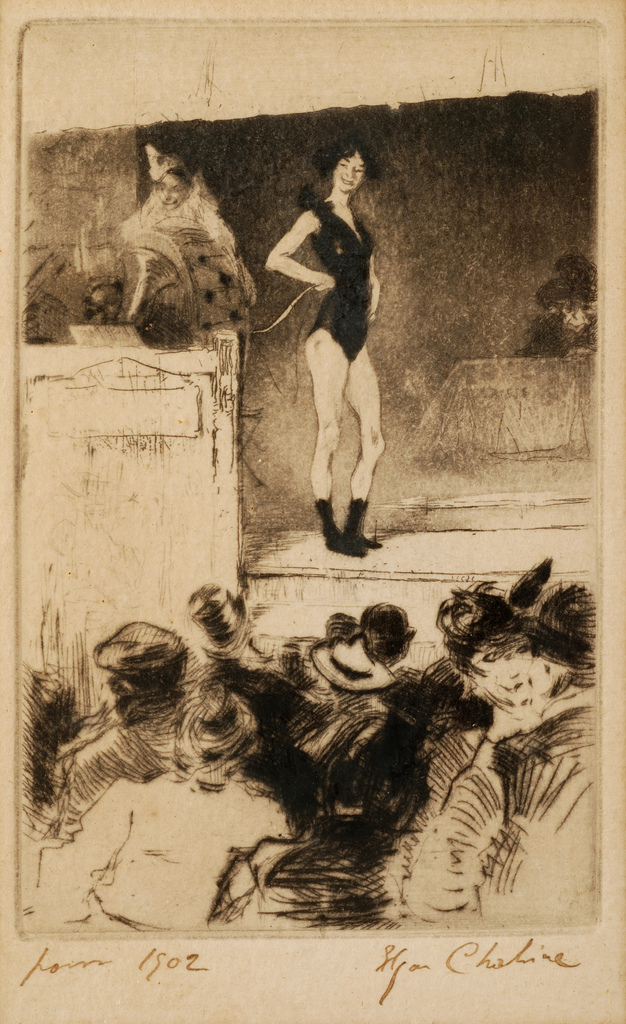 A Sunday visit to the Los Angeles Fine Print Fair — seeking respite from the onslaught of Donald Trump —  to attend a public conversation between gallerist Jack Rutberg and artist Ruth Weisberg, spawned a new relationship!

A fateful encounter with a wonderful teensy engraving, reproduced above.

That in turn makes me the proud owner of “L’Invite apres la parade” (1902), a drolly observed engraved print by a heretofore unknown artist, Edgar Chahine (1874 – 1947). Chahine was a French painter, engraver, and illustrator of Armenian descent.

We purchased this lovely rendering of a brave cabaret performer from New York art dealer Georgina Kelman, who was visiting Los Angeles for the show. arts·meme friend Jack Rutberg acted as consigliare in the purchase.

Born in 1874 in Venice, Italy to Armenian parents, Chahine spent his youth in Constantinople. Prior to relocating to Paris in 1895, he spent time in Venice where he studied under Paoletti and at the Academia di Belle Arti.

In the late 1890’s he began making intaglio prints, frequently mixing media to achieve desired effects. Chahine truly loved printmaking. He worked in etching, drypoint and aquatint and combined these media.  His work is characterized by a precise use of line and an honest, selective eye, neither patronizing nor sentimental in interpreting the world around him. 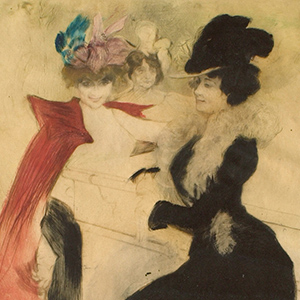 One of his popular subjects waw the elegant ladies, the “femmes” of the fin de siècle. If women still dressed like this, wouldn’t you draw and paint and engrave them too? Chahine’s subjects extended beyond society women to performers, café habitues, “femmes fatales” and shopkeepers.

Chahine is known also for delicate landscapes and seascapes.

In 1925, he became a French citizen and began a burst of creative activity in illustrated books and fine prints. Many of his prints were destroyed in a fire in his atelier in 1926 and many more in a flood in 1942. Throughout his career he executed over 600 etchings, some in color.