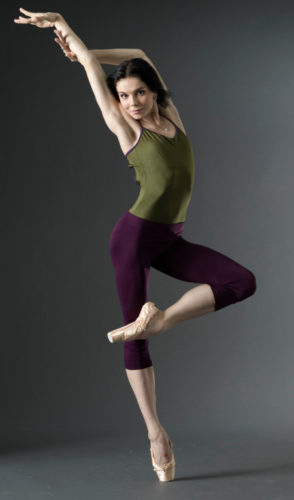 The latest edition of packaged ballet entertainment wrangled by impresario Sergei Danilian, the force behind “Tour de Force III” presented Saturday night at the Segerstrom Center for the Arts, brandished a sorry statistic.

That each of the evening’s four repertory items was the creation of a male choreographer unfortunately goes without saying.

The marginalization, no, disappearance of the female voice in ballet choreography has become the norm. But in a new disappointment, two of the evening’s four ballets featured male-only casts.

Even in its conception, the program skewed toward the masculine. Its title, “Tour de Force,” as a descriptive, tends to be associated with virtuosic male dancing.

Only the extraordinary Natalia Osipova, giving her characteristic 110% effort in the program-closing “Silent Echo,” saved the evening for women. The waif of a ballerina showed the guys how it really should be done. 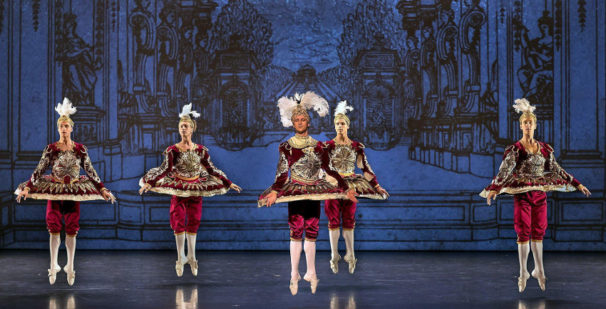 A fascinating restaging of an historic French ballet, “Le Divertissement du Roi,” opened the program. It allowed us to revisit the very male roots of ballet classicism in the 17th century — the bad old days to which it seems we have returned. Ironically the pageant displayed not men in tights but men in tutus. The 35-minute work, however beautifully danced with control and detail by its hardworking five-member cast, also put forth a version of male narcissism and preening that has become too familiar in the art form.

To be fair, “Divertissement” was intended to feature a cameo appearance by  prima ballerina Diana Vishneva, one of the stable of dancers Danilian regularly presents in Orange County. Vishneva, sidelined by injury, was weirdly replaced by a man. This replacement rubbed salt in the wound. Was there no qualified woman to fulfill this task? 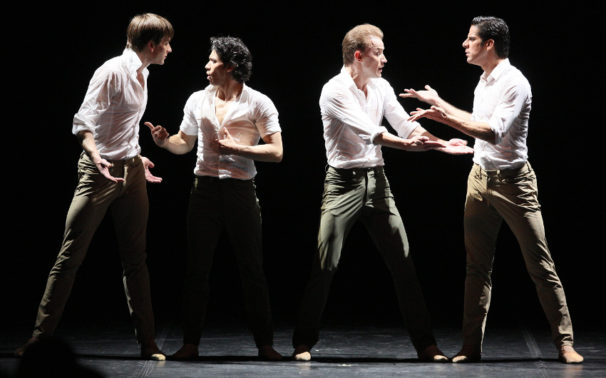 Marcelo Gomes’s middling choreographic exercise,”Tristesse,” set to Chopin piano etudes, charmed because its creator, the longtime American Ballet Theatre principal dancer, is a beloved figure in American ballet. But as a choreographer, Gomes indulged himself by mining every Chopin fillip for a cutesy gesture. He did little to advance Jerome Robbins’s definitive and magisterial “Dances at a Gathering,” a ballet masterpiece similarly set to Chopin.

Robbins’s sparing use of gesture gave his music a new aspect; Gomes trivialized it.

Noteworthy and outstanding was the presence on stage of Friedemann Vogel; it was my first glimpse of this exquisite German dancer.

When women managed to break through the glass ceiling of “Tour de Force III,” they kicked it hard, in the most artistically interesting outing of the evening, “Clay” by choreographer Vladimir Varnava.

In his selection of exceptional music (albeit a recorded version) by a great composer, the Frenchman Darius Milhaud, Varnava earned extra points. Victoria Brileva, Yulia Kobzar and Zlata Yalinich, all of the Mariinsky Ballet, brought real equal presence to their male counterparts. Brileva seized the stage, opening the ballet with a beautiful strong solo. Along with its pleasureful sense of space, timing and musicality, this piece offered humor and humanity. It gave hope that men and women can still actually dance together. 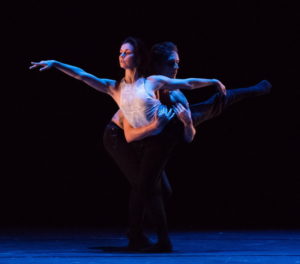 British choreographer Russell Maliphant’s “Silent Echo,” danced by Osipova and Sergei Polunin, was seen in excerpt. It will be presented in toto this fall in New York City.

Polunin, already an internet phenom and soon to be a movie star, made his West Coast debut in the dark work — but we could barely see him!

“I only want to dance with Natalia,” recently proclaimed classical ballet’s newest freelancer, having shorn his attachment to the Royal Ballet. 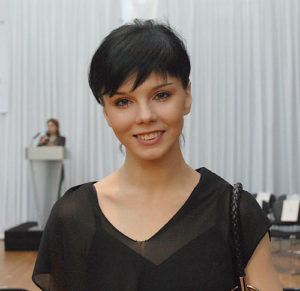 Polunin, you got that right.

From the get-go, whirling and twirling in pools of light and darkness, the couple oozed danger and mystery. But it was the other worldly Osipova, a creature possessed, her witchy black hair straggling alongside her slender body, who grabbed the eye.

She let loose a barrage of the smokingest chaine-turns I’ve ever witnessed. Spinning demonically, she stopped on a dime in a way that would make Michael Jackson proud. She out-danced even “it” boy Polunin whose documentary DANCER will open soon.

Osipova showed up not just as tour de force, but as an artist.

I plan to ask Polunin about dancing with Osipova when I interview him September 9 at the Laemmle Monica Film Center. Please attend.