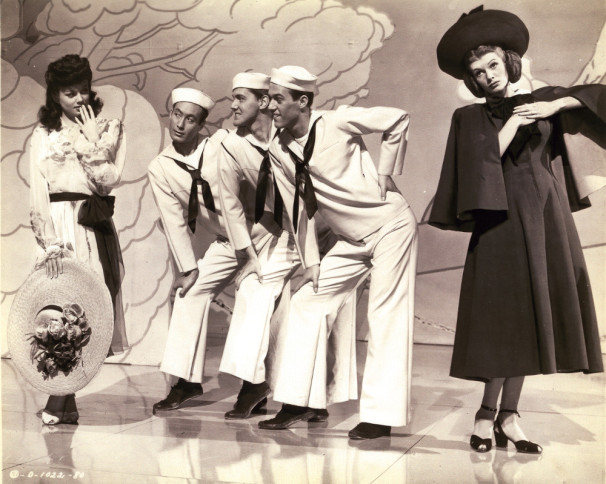 The war was just over — September 2, 1945. The streets of the nation, especially the big cities like New York and Los Angeles, had been teeming with military men. So it’s not that unusual that choreographers were putting these figures into their dances. 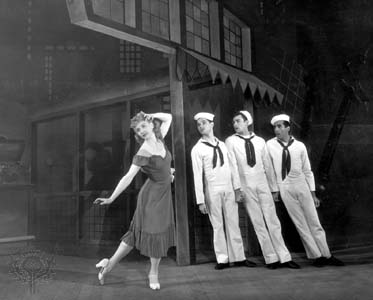 And yet, it’s odd, isn’t it, that a trio of sailors finds its way, simultaneously, into Jerome Robbins’s hugely influential and successful ballet for American Ballet Theatre, “Fancy Free” just as Jack Cole was doing the same in TONIGHT AND EVERY NIGHT (1945), made at Columbia Pictures in Los Angeles.

“Fancy Free” was created on an ABT road tour.

It got put together in helter-skelter bits and pieces while Ballet Theatre was on a nationwide tour. Back in New York, Bernstein was mailing Robbins homemade records of the music he’d written the previous day. Fancy Free was created in an almost haphazard manner with rehearsal times and places grabbed in between performances. The cast worked in empty hotel ballrooms, in theater basements, and in one case even on the street.

“Fancy Free” premiered at the old Metropolitan Opera House in New York on April 18, 1944. The ballet created a cataclysm, in a good way, for its choreographer. 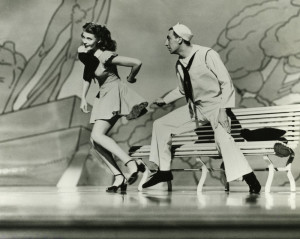 “Tonight” was in production at Columbia Pictures, simultaneously, May 8 – September 28, 1944. The film was released January 9, 1945. Jack Cole famously danced in the number,”What Does an English Girl Think of a Yank,” with Rita Hayworth.

“Fancy Free” had a continuing life. The ballet provided the thematic foundation for, first, a Broadway show, in 1944, and then a very famous movie, “On The Town” (1949).

According to Robbins’s Wikipedia entry,

The inspiration for Fancy Free came from Paul Cadmus‘ 1934 painting The Fleet’s In!, which is part of the Sailor Trilogy. Robbins’s friend Mary Hunter Wolf recommended him as choreographer for a ballet based on the art work

“Tonight and Every Night” photo courtesy of The Academy of Dance on Film.