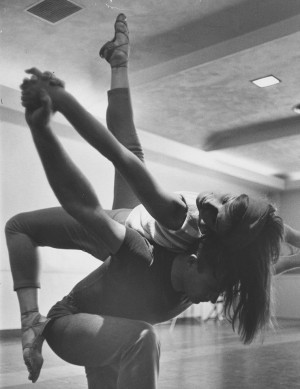 An interview with the statuesque and still beautiful Barrie Chase spurred a conversation on Facebook about the hip-looking Grecian-style sandals the cool sixties dancer wears in these photos.

Chase has not only gorgeous long limbs, but beautiful ballet-trained feet.

“I have called them Hermes sandals. I thought Bologna’s famous bronze of Mercury/Hermes “en attitude” was wearing them.

But he isn’t actually. (And it wasn’t because of Hermes Pan either). Wonder where it comes from too. Maybe another rendition of the mythical Hermes.”

Next coming to the rescue, also on Facebook, from afar in London to illuminate this great dance-shoe mystery, the wonderful former Joffrey Ballet dancer Christian Holder. 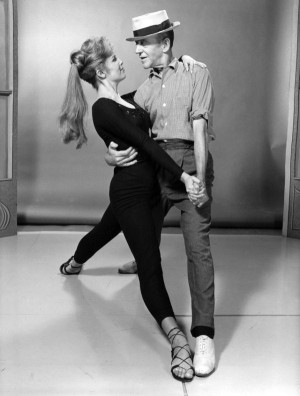 Writes Christian: “In the ’50s and ’60s Capezio put out a line of dance shoes called Hermes Sandals. They gave a barefoot, ethnic look while still supporting the sole of the foot. Other dance-shoe makers also had versions, but to “gypsies” they were all known as Hermes Sandals (after Hermes/Pan – the Greek god, not the choreographer).”

Holder continues: “Later there were similar sandals, reduced in size. These were made of suede, had a thong between the big toe and the second toe, and a sort of

sling-back strap. Hermes were made of plastic, if I remember correctly, with ties that crisscrossed up the ankle, and left deep tell-tale marks where they cut into your flesh!!

Thank you Don and Christian!