For the longest time, we have wondered whether the great choreographer Jack Cole (born in New Brunswick New Jersey, he got his start as a barefoot Denishawn dancer) worked with Rita Hayworth on her Latin-dance number, “Amado Mio” from GILDA (1946). 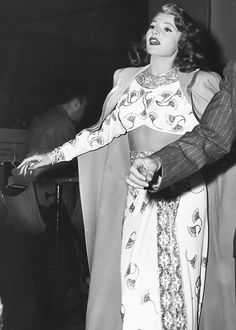 That choreography would be above and beyond his well-acknowledged creation of Rita’s seminal, classy striptease, “Put the Blame on Mame,” in her noirish nightclub scene co-starring Glenn Ford.

Evidence has finally surfaced in the form of a soundstage rehearsal photo, at right, with Rita dressed in her “Amado” costume…

… alas, a nasty photo crop, we only see Cole’s arm. Where is the rest of Jack Cole?? Dance detectives, please get on the case, let’s find this photo!

Rita is sumptuously draped in the Mother of all Sarong Skirts by Columbia Pictures costume designer, Jean Louis. What terrific dance wear!

The Great Movie Goddess’s loose hairdo was reputedly Jack Cole’s idea. Rita Hayworth is all dancer in this sequence. She is saucy, sexual, confident. Someone helped her look like that. That would be Jack Cole.