Classical audacity at The Broad 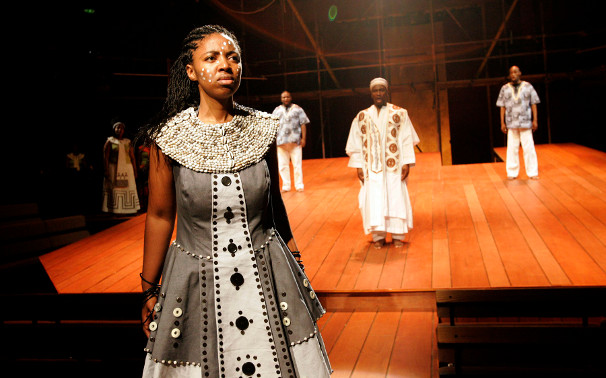 There are three extraordinary opportunities to experience daring, innovative classical music at The Broad Stage this fall. First, the Isango Ensemble of South Africa re-imagines Mozart’s The Magic Flute. Then the local, stellar, Calder Quartet will perform twice, once with soprano Yulia Van Doran and then with film composer Bear Mcreary.

The best Mozart operas are universal masterworks, rivaled only by Shakespeare in their relentless relevance, timelessness, and adaptability. I remember a hugely successful, historic production of King Lear in New York. It was set in a vintage 70s Cadillac, with Lear as a southern matriarch dividing her Tara-like estate between her three sons. The Tempest and A Midsummer Night’s Dream are perhaps even more adaptable to radical settings and approaches. Mozart’s opera The Magic Flute has the same towering, mystical resilience and flexibility. The Isango Ensemble, a Cape Town-based theater company directed by Mark Dornford-May will feature his wife, the soprano actress Pauline Malefan as the Queen of the Night, and the highly praised Sonwabo Ntshata as Tamino. Mozart’s indelible, soaring melody will be performed by an ensemble of marimbas, jazz trumpet, horns and percussion, conducted and arranged by Mandisi Dyantyis. This full-on adaptation of the opera also features African dance directed by choreographer Lungelo Ngamlana. Re-titled “Impempe Yomlingo”, the opera will be performed in a mix of English, Xhosa, Tswana and Zulu. The production was a hit in New York and Chicago, and won an Olivier Award for Best Musical Revival at the Young Vic in London, and a Globe de Cristal for Best Opera at the Théâtre du Châtelet in Paris.

The Broad Stage also deserves high praise for its local programming, creating a residency for the Calder Quartet. The Calders are based here in LA and are also renowned here. But they may generate more radical heat and light when they perform in New York at the club Poisson Rouge or the Metropolitan Museum of Art. Like local architect Frank Gehry, some of our best musical artists often seem to find better work and more respect away from home. The Broad has engendered a fantastic exception to this rule. The Calders trained at USC, the Colburn School, Juilliard, and with the legendary Prospero of chamber music, Eberhard Feltz in Berlin. Their chops in the standard repertoire rival any musicians of their generation. They are steeped and spectacular in Haydn, Mozart, Ravel, and Bartok, achieving a classical solidity lacking in groups like the Knights and Brooklyn Rider. But our best and most audacious living composers also collaborate with the Calders: Christopher Rouse, Peter Eötvos, and Thomas Adés, among them. And they are notorious for playing with bands like the Dirty Projectors, Vampire Weekend, and Airborne Toxic Event, groups the Pacifica or Brentano Quartet wouldn’t touch. It will be nothing less than thrilling to hear the Calders play Schubert and Schoenberg. What will they do with the fabulous Russian-American soprano Yulia Van Doren, and with their old classmate the sci-fi composer Bear Mcreary?