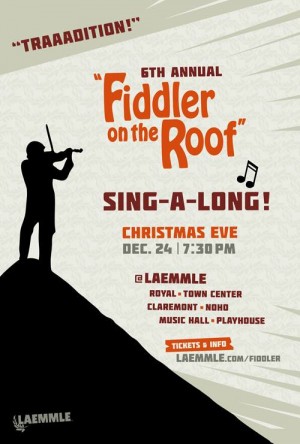 For an “alternative” Christmas Eve, not restricted to the Jewishly oriented but for shower-stall-soloists of every persuasion, we have a suggestion.

Belt out your holiday spirit — or your holiday angst — with your fellow meshuggenahs while watching director Norman Jewison’s 1971 version of the beloved Broadway show on the big screen.

Even movie maven Kenneth Turan kvells over this event — he recommends it as an L.A. Times holiday film-pick.

In the small faraway shtetl of North Hollywood, arts·meme‘s tummler-in chief, Debra Levine, will host the evening’s festivities at the Laemmle NoHo7 — trivia questions, prizes, costumes — prior to the screening.