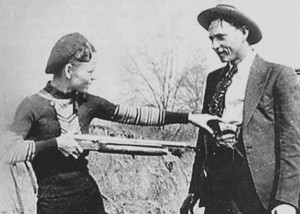 “You couldn’t grow up in Texas without knowing about Bonnie and Clyde. They were folk heroes. Kids would dress up as Bonnie and Clyde for Halloween,” said filmmaker and writer Robert Benton, a Waxahachie, Texas native, speaking before a screening of his highly influential 1967 movie at TCM Fest.

Benton, who went on to direct [notably, Kramer vs. Kramer], co-wrote the screenplay about two Depression-era anti-heroes with David Newman. The gangster flick, which stars two of the more gorgeous creatives of sixties cinema, Warren Beatty and Faye Dunaway, got a terrifying screening Friday afternoon at the Chinese Theatre. It is a very frightening movie. 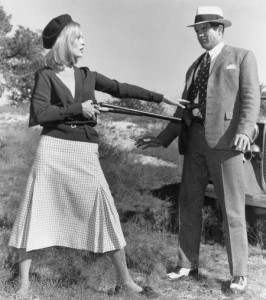 Benton reminisced with Dennis Bartok who interviewed him. “I had been working as an art director at Esquire (magazine] and I got fired. I decided to write a screenplay.

“I am dyslexic. I cannot spell or punctuate. I knew a young editor at Esquire, a wonderful writer, David Newman. I sold him on the glamorous life of the Hollywood screenwriter.”

What interested the two was the idea that their characters were not just outlaws, “but also outcasts,” said Benton. “We set out to make an American French new Wave movie.”

“We got hold  of old detective stories, and [writing by] Clyde’s mother and Bonnie’s sister, a book which we leaned upon heavily. We wrote an 80-page treatment with no dialogue. Francois Truffaut worked with us for two days [on the treatment].

“For four years, [the project] was turned down by everybody [all the film studios]. Then one day, Warren Beatty [he would produce “B & C” and star as Clyde Barrow] called me. I offered to drop the screenplay at his hotel. Instead, he said he would come by the house [to pick it up].

“Warren took over [producing the film]. He said we need an American director, not Truffaut or Godard. Arthur Penn came on [board]  and we started to shape the film. It was a kind of miracle, that collaborative process. 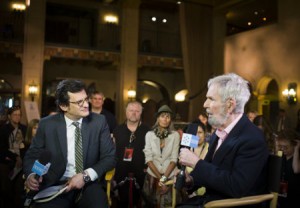 As for the film’s brand of violence (the infamous ‘bullet-ballet’ closes the movie), Benton said, “We had a line:  In this movie it should look like people were really killed.”

Concerning Clyde Barrow’s sexual dysfunction [the character declines, in key scenes, to make love to Parker], Benton noted: “We wanted to show a complex human being. Not just your average outlaw but someone more complicated.”

Bartok wrapped the interview by stating succinctly, “Well, it’s a brilliant movie based on a brilliant screenplay.”