Lost Sound, a short film made between 1998-2001 by John Smith and Graeme Miller — two British artists, respectively film maker and composer — was a highlight of a Smith retrospective by Los Angeles Filmforum this weekend. The wonderful 28-minute gem spooled in the cool screening room of the Echo Park Film Center. The filmmaker, visiting Los Angeles, was present at the screening and gave remarks. 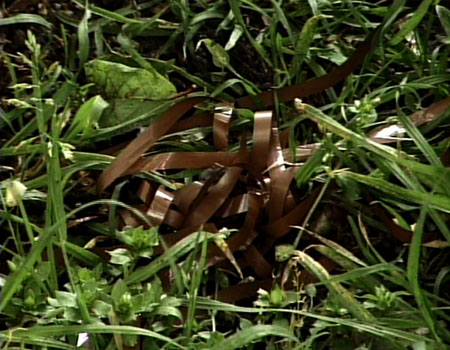 In making Lost Sound, Smith and Miller foraged London neighborhoods, scoping for wads of discarded cassette tape that in one way or other found their way into the streetscape. Threads of the icky brown plastic material are captured in every neighborhood nook: fences, light fixtures, barbed wire, gutters, sidewalks and most disturbingly, entwined in nature. Smith’s placid camera reveals tape stuck in bushes, shrubs, grass; it’s seen blowing in the breeze from tree branches and even embedded into the bark of growing trees. Assembling the footage, the duo interrupted their own process by yanking the tape from its nesting place and recovering sound from it. This sound accompanies the film — whether discernible or in distressed state, played forward or backward. The tape-tour reflects a multicultural London; that vibrant ethnic populations are symbolically silenced (it is suggested, censored) finds wretched form in the discarded material.

Just brilliant. I loved viewing Lost Sound in the presence of the artist as well. Three other films were on the program at the wonderful and friendly screening room off Sunset Boulevard. Well done, L.A. Filmforum.