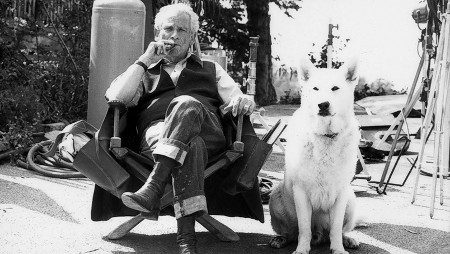 A nice note from our friends at Larry Edmunds Bookshop:

August 12 marked what would have been the 100th birthday for one of the most influential and interesting filmmakers out there, Mr. Sam Fuller. His life , so full of adventures before he ever thought of directing, makes his autobiography, “A Third Face” a fantastic, don’t-want-to-put-down read. The American Cinematheque is celebrating Sam at 100 with three nights of his films at the Aero Theater in Santa Monica. We’ll be there Saturday, night #2 with Sam’s wife, Christa Fuller (and daughter Samantha Fuller) , who will be signing “A Third Face”, the book she made sure was finished and published.

The early independent film director Sam Fuller (1912 -1997) influenced directors Quentin Tarantino, Wim Wenders and Jean-Luc Godard among many others. Fuller pushed the boundaries of genre film making with ripped-from-the-tabloids narratives and in-your-face close-ups, all the while depicting the grim heart and lower depths of American society. Included are “Pickup on South Street,” “Shock Corridor,” “The Naked Kiss,” “Forty Guns,” “Underworld USA,” and “The Steel Helmet.”