“We were in the middle of the most chaotic place in the world. A place that when you are there you want to leave. We’re there and people are taking the moment in and participating like crazy. Our workshops are so crowded. People get inspired by seeing seniors dance, it’s really moving. They want to jump up and do something too.” 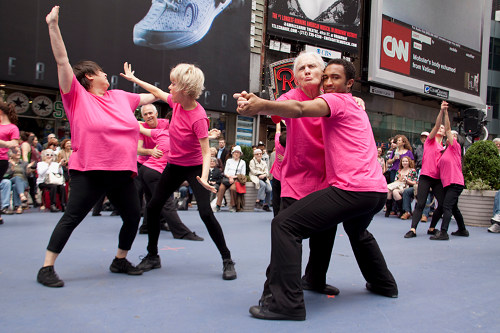 That’s the voice of choreographer Naomi Goldberg Haas concerning her latest creation, “Round Up” that’s happening now in New York. The event is in partnership with the Times Square Alliance/Times Square Arts. For decades, Goldberg Haas has been working with the kinds of people and bodies that traditional dance has neither patience for nor interest in.

“Round Up” is a circle in a square. It’s the”rounding up” of a diverse group of older adults from Croatia to the Philippines at Project FIND Woodstock Senior Center in the heart of Times Square. The seniors form an integral part of the performance, mixing in with professional dancers. Rehearsals took place for three months at a resident senior center. Those who opted out of dancing watched and gave notes.

Says Naomi: “The seniors are doing a great job. They’re getting spruced up — even coloring their hair! At first they were concerned they would miss their lunch. Their meals are at their Center, so they would miss a key meal. It’s a big deal. So the arrangement at the beginning was that they would get their lunch.

“Now they don’t care at all. They’re basking in the glory of Broadway!

“You are so exposed in Times Square, it’s people taking a daring move. Others, watching, say well why not? So they join in. It’s so liberating.

“By setting planters and chairs in a big circle, it feels safe. You are defining a space within this kookiness and the space outside seems dangerous. It’s a cocoon, but a very open cocoon. Every single person can perform for hundreds, but they feel very safe because they feel totally free.

“As a society, we are craving physical expression. [In “Round Up”] we’re saying, ‘It’s here. It’s available to you. This is your right to move.’ They just jump in and participate.

“It’s a very powerful thing: this is your body, your movement has an expression. I think it’s because it is not young people. The work says that this can happen for people with disabilities and limitations.

“We can’t sign them up fast enough,” says Goldberg Haas.