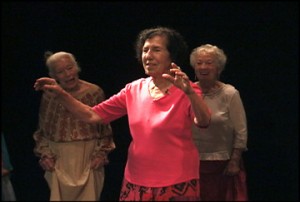 Miriam Rochlin was born in Bonn in 1920 and she died last week in Los Angeles, a huge lifetime later. I knew Miriam only slightly, but knowing her at all was a great privilege.

Only breaking her collar bone in a car accident at age 66 caused Miriam to cut back on doing cartwheels and handstands — and walking on her hands — on the beach. But she taught dance till she was 90.

“My attitude is to assume from the beginning that everyone is beautiful. Isn’t that marvelous? Fly out! Fly out!” said Miriam, according to Karen. 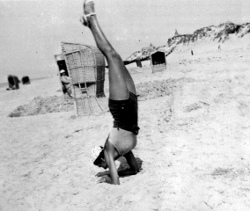 Reprinted, with permission, from “REAPPEARING ACTS: From Jewish Life to Jewish Dance Theater,” an essay that addresses Miriam’s background and her contribution to Yiddish dance theater, along with fellow Jewish exiles, Nathan Vizonsky and Benjamin Zemach.

Miriam Rochlin’s paternal grandfather, Bernhard Cohn, was an assimilated doctor until an anti-Semitic smear campaign. In 1896, he published, almost simultaneously to Herzl, a pamphlet titled Before the Storm: A Serious Warning to the Jews of Germany. The family became important Zionist activists and most of his children immigrated to Palestine in the 1920’s, except for his son Rabbi Cohn [Miriam’s father] and family. Because of his commitments to his congregation and to speaking out against the Nazis, he remained longer. 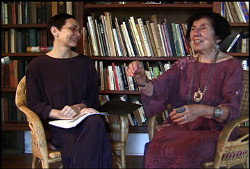 The Cohns’ friends included poet Elsa Lasker-Shuler and Catholic opera star Henny Wolf, who was called “aunt” by the children. Stage and film actor Alexander Granach was “uncle.” Miriam’s mother’s mother remained a successful banker after her husband’s death and was the only female member of a poker club in Muelheim/Ruhr. Her cousin married Gurit Kadman, the mother of Israeli folk dance. Everything was discussed at the dinner table: art, religion, love affairs, sexual preferences of friends. But the dinner was kosher and blessings said.

For about a year, when Miriam was 10, she and her father spent time every day translating Genesis from Hebrew to German. As Miriam explained this two-sided identity, “We were quick-change artists.” 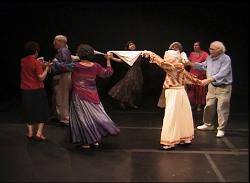 Inspired to choreograph after seeing her first ballet at age six, she studied ballet and interpretive dance. She saw famous Expressionist dancers and Hollywood musicals. In 1933, the Nazis required Jews to attend Jewish schools only. In 1934, she applied for teacher certification in dance at a German institute, which would take her only under another name. Her mother refused. She was taken into the Juta Klamt Institute, but could only afford one day a week. After her second class, Juta’s husband, in the Nazi hierarchy, told her she could come every day at no extra charge, which she did for 2 years until it became too dangerous. She attended another an institute, taught by a Russian émigré, training in modern, ballet, anatomy and kinesiology. In January, 1937, she received her diploma, and left for Holland with her father. 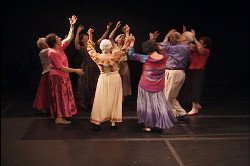 dance class again. She worked with Benjamin Zemach for 20 years as his assistant and in both his dance and theater companies. She taught dance and drama for Jewish schools and for the city school system’s Adult Schools. She taught Confluent Education at Hebrew Union College, using movement, art and music to teach the Bible Through Improvisation, and the same class at a Catholic high school. In 1971, she choreographed The Dybbuk for USC, and in the 1980’s, Miriam led pre-performance discussions for a major L.A. production of The Dybbuk.

In 1986, she showed “The Art of Benjamin Zemach” at the 92nd St. Y for the conference Jews and Judaism in Dance. This important document is the only film of [Zemach] dancing, with dances dating back to early 1920’s Moscow and circa 1930 New York.

6 thoughts on ““Fly out!” cried Miriam Rochlin. The L.A. dancer/dance teacher has died.”