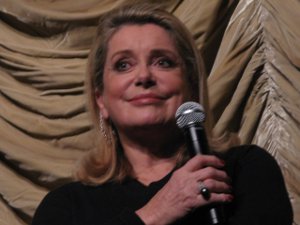 The film goddess Catherine Deneuve, at 66 larger than life, still impossibly beautiful, and emanating the off-putting mix of power and femininity that characterizes French women (and intimidates me!), received the audience’s full adulation in a personal appearance tonight at LACMA’s Bing Theater.

We’d just watched Francois Ozon’s latest, “Potiche,” a wacky French farce about the growing feminist consciousness of a wealthy industrial wife in the 1970s. How quaint; the family factory manufactures umbrellas (de Cherbourg?). La Deneuve figures imperiously and comically in nearly every scene, a huge role for her in a fun recommended movie. 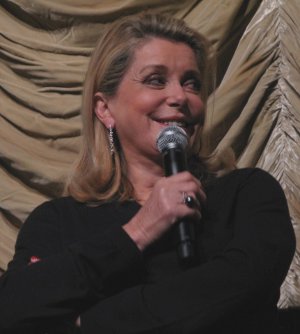 Engaging with LACMA’s ever-fluid film curator, Ian Birnie, Deneuve was a tough interview, failing, in conversation, to comprehend Americanisms, such as our eternal quibble over funding public radio, the fact that actors have to wait tables between gigs, and that our neurotic movie actresses double as kleptomaniacs.

She looked totally confused when it was suggested she should make a film in Los Angeles, or even want to. Why would she do that, she somewhat stumbled, when she works steadily in France?

She didn’t give much beyond her regal and ravishing presence, garbed as she was in black knit, her blonde hair tucked back, then falling naturally to her shoulders in absolute perfection. Two large hoop earrings, presumably made of tiny diamonds, framed her stunning face, and diamonds, as well, circled her ankle in a bracelet decorating one of her pretty legs.

Like, who do you know that wears bare legs, perilously high heels, and an ankle bracelet … and still looks like royalty?

Here’s the trailer for “Repulsion,” Polanski’s amazing film that we saw last Friday night as part of LACMA’s Deneuve retrospective: