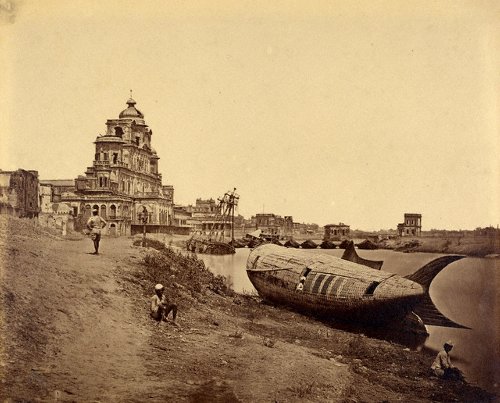 Photographs by Felice Beato (1832–1909), an Italian-born rolling stone who roamed Asia in the latter half of the 19th century, are on view in a worthwhile exhibit at the J. Paul Getty Museum.

Using his cumbersome camera and his good eye, Beato delivered to the West some of the first photo images of Asia’s exotic cultures and landscapes.

From photography’s early days, Beato played it two ways, both as a journalist and as an artist.

Two equally bizarre objects (click on the photo above for detail) — a waterside colonial-era edifice and a moored boat in the shape of a fish — say much about imperialism’s unequal struggle. It’s early photo-journalism; Beato makes a visual statement about a quashed Indian rebellion. A separate series shows a hapless Chinese fort defeated by (superior) British weaponry and the gory aftermath — Chinese corpses strewn on the ground. China’s humiliating century (the 19th) provides the backdrop for the Getty’s companion show, 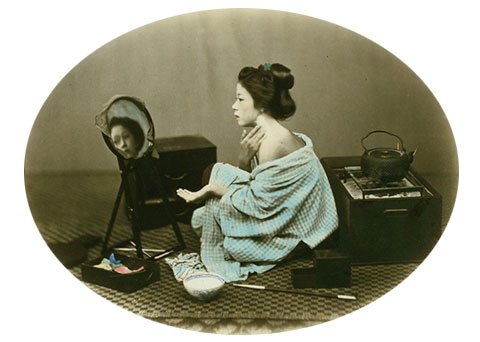 “Photography from the New China.”

The peripatetic Beato ended his career as the proprietor of  a Yokohama photography studio (his final destination was Mandalay, in Burma, where he ran a curio shop). His Japanese portfolio, in particular, excels for the subtle use of photo-coloring techniques. The many pastel-tinted domestic scenes reflect the photographer’s obvious fascination with Japanese culture.

Felice Beato: A Photographer on the Eastern Road | Getty Museum | thru April 24, 2011

Like this? Then fall further down the rabbit hole: