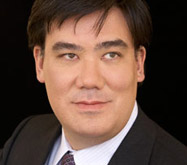 Joining Gilbert in the meeting was his composer-in-residence, the Finn, Magnus Lindberg. Also on the panel was Gilbert’s artistic administrator, John Magnum, formerly of the L.A. Philharmonic.

The 43-year-old native New Yorker struck us as notably unneurotic, unimperious, and unspoiled. Indeed, he seemed normal, reasonable, and well-balanced. He’s a conductor … so … what’s up with this guy?

Gilbert chatted genially about his new job in the wake of two sold-out performances of Ligeti’s “Le Grand Macabre,” an unusual program selection that won the high praise of the New York press (read Justin Davidson’s elegant review in New York Magazine). The Philharmonic’s notoriously persnickety audience seemed to like it too.

“I wasn’t surprised by the reaction to “Grand Macabre,”” said Gilbert. “I had the feeling we could sell out. When we put the institutional might of the orchestra behind a program, we know we can do well.”

The press and the city at-large are viewing in this non-controversial young man a palatable change agent for the orchestra’s revival. He advocates a pleasing agenda of evolution . . . not revolution.

“I believe in the power of what the traditional orchestra has been doing for years. I don’t think the format is flawed. People can still buy a ticket and have an important human experience in our hall. I don’t think we need to be aggressively high-brow. But the New York Phil has been out of the picture for years. It’s been marginalized. It’s important to me [to bring it back.]”

“There’s been a lot of soul searching going on — with a lot of discussion of what our mission is and what our artistic vision is. In fact, we are not presenting more contemporary music then before. We don’t program contemporary music out of sense of duty and there’s no tokenism. I just program the music I like.”

He added with quiet confidence: “I feel like I’ve been hired to be myself.”