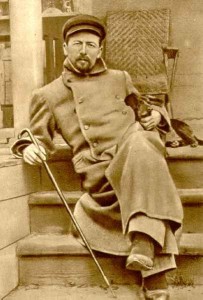 There’s only one more weekend to skedaddle to the delightful 24th Street Theatre for final performances of “Anton’s Uncles,” which the effervescent creative team of Debbie Devine and Jay McAdams co-produced with Theatre Movement Bazaar‘s ex-Mummenshantz word-and-movement mavens, Tina Kronis and Richard Alger.

I had the big fun of attending this witty, polished, and well-written show — smart from stem to stern — on the occasion of Anton Chekhov‘s 150th birthday. And it was a party. The show is an adaptation, reproduction, recreation, compression, deconstruction, homage, tribute, everything-you-ever-wanted-to-know about the dour Russian’s “Uncle Vanya” (1896). Its all-male cast of five well delivers snippets of ennui about drinking tea (and life’s other tea-diums) interspersed with dance sequences. Super creative. Full of angst … and laff lines.

Meanwhile, till September, the perpetual prince of angst recycles his spiraling saga in a marvelous outdoor “Hamlet” at Topanga Canyon’s historic Theatricum Botanicum. The production’s uneven staging and cast (Mike Peebles, however, takes a highly credible run at the lead role) do not undo the pleasure of watching the great tragedy unfold in the chilly night air. The familiar words keep you warm.

This venue is so much fun — it’s like taking a 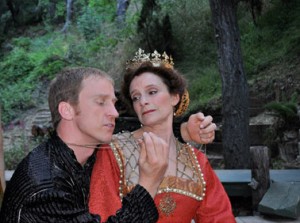 little day trip, only you’re still in the perimeters of our funky village of eleven million people. The preferred route to Topanga begins at the Pacific Coast Highway; the ocean gleams in your rear-view mirror as you climb toward L.A.’s rustic hippie community.

On the drive home, you swerve insane hairpin turns, the electricity-gobbling San Fernando Valley inexorably sucking you down the hill. Gawd, how it spreads, disturbingly beautiful, into the distance; one of the most awesome visions of man’s built environment on earth. That’s when you really know you didn’t just see a play in Manhattan.