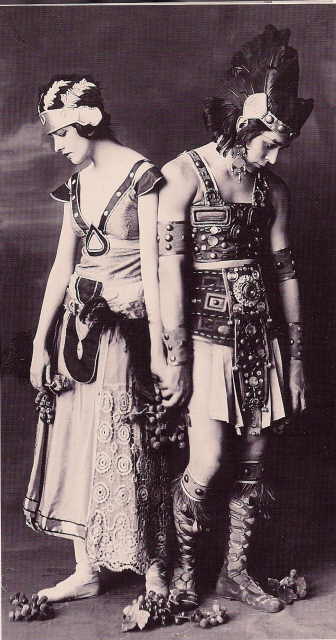 Kosloff brought to the stage the role in which he made his cinematic debut  — Guatemoco, the Aztec prince, in Cecil B. DeMille’s “The Woman God Forgot” in 1917.

Kosloff’s partner Rambova was born as Winifred Shaughnessy in the great state of Utah in 1897. Receiving a superlative arts education while residing in Paris with her aunt, interior decorator Elsie de Wolfe, Winifred was dazzled by the triumphant Kosloff in a London performance circa 1909.

Five years later, in 1914, the willful lass found her way to the stick-wielding ballet master’s Times Square dance studio in New York. There the Russian seduced his 17-year-old student, renaming her Natacha Rambova after a prior Moscow girlfriend. The fact that a 32-year-old married man-in-tights was philandering with her daughter vexed Winifred’s mother exceedingly.

Joining Kosloff’s band of gypsies, Rambova teamed with the arts entrepreneur (nice way of saying that Kosloff was very keen on making a buck) on the road trip to Los Angeles. Arriving in the cultural backwater, Kosloff deemed the natives ripe for high art, and here he settled for the next forty years. He also had the crazy good luck of bumping into Cecil B. DeMille right when silent pictures were taking off. 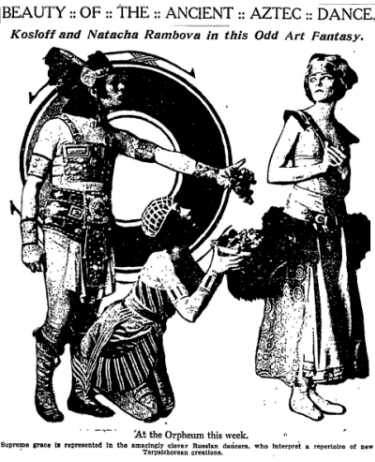 Rambova costumed her lover for his film roles (early-silent actors commonly provided their own gear, i.e., no costume department!) and to my eye, she dressed others in the cast as well. She was good at it. She gained skill as a film costumer and then as an art designer.

Meanwhile, Kosloff, a legend in his own mind, took credit around town for Rambova’s work, using her as an anonymous subcontractor.

Fed up, the strong-spirited girl left Kosloff (I tell the story of their parting here.) Rambova got her best revenge by marrying the nearest available gorgeous hunk, Rudolph Valentino.

But we get ahead of ourselves. Back to the costume.

An early gossip column in the Los Angeles Times dated September 9, 1917 and entitled “Kosloff Now Happy” (apparently this was headline news) features the Russian kvetching about his cloak:

“To meet the historical demands concerning Aztec princes, a wonderful white feather coat was designed which came to be quite significant in the studio. So costly was the robe, solidly set with virgin white feathers, that the business manager almost had a stroke when the bill was presented. Then the pesky thing was nine meters long, which made it impossible to pack, as to fold it would break the feathers and ruin it utterly. It was, therefore, always necessary to have a special automobile to take it to location from the studio. More expense and vexation. … Mr. Kosloff complains rather querulously that his fellow-artists were loathe to participate in scenes with him for fear of breaking the expensive feathers. In fact, he declares it was a vast relief when he finally doffed the troublesome thing.”

The feather coat rings true as a Rambova touch. She was a serious aesthete; within five years, shorn of Kosloff, she would be designing extraordinary art deco sets and costumes for Alla Nazimova’s art films, notably Salome (1923).

She was a major talent. More on Rambova’s artful designs soon.