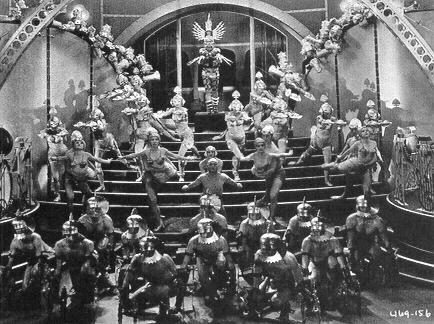 This is the amazing “electricity” dance sequence from Cecil B. DeMille’s early talkie Madam Satan (1930). A socialite costume ball is taking place — where else? — in a moored zeppelin. The floor show, pictured above, features the fearsome dancing of Theodore Kosloff, a former Ballets Russes star who lived in Los Angeles and acted in many DeMille silent films. That’s Kosloff reigning on high with electrical bolts for fingernails.

After a long day researching Kosloff and his artistic circle, I sought a quiet dinner at a cute patio-restaurant on Melrose Ave. Tucking into my pasta, I spied actor James Cromwell (L.A. Confidential, The Queen, Babe) entering the restaurant. As he walked near to my table, I burst forth: “I just watched your mother’s movie five times this weekend.” 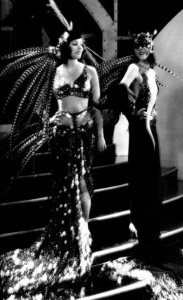 That’s Kay Johnson standing on the right, bedecked in a cowl. (click photo for better view)

Adrian, the designer of this bewitching ensemble was born Adolph Greenberg. He began his career with DeMille in 1925, and was part of the production unit DeMille moved to the MGM lot in late 1928. At MGM, Adrian flourished.

We are celebrating the centenary of the February 1909 publishing of the Futurist Manifesto on the front page of Le Figaro. Italian futurism had its greatest offshoot in Russian futurism.  That’s why I’m convinced that Kosloff imported something very arty and European if not distinctly Russian into a Cecil B. DeMille film.

Meanwhile, back in Los Angeles, I enjoyed the chat with James Cromwell. A really good actor and a great guy. 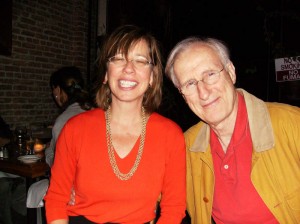 6 thoughts on “The devilish Madam Satan”