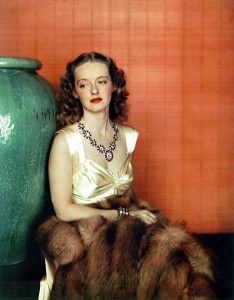 To celebrate the occasion, we attended a LACMA double-bill of two of Davis’s late-career outings (post-All About Eve and pre-Baby Jane). We watched in morbid fascination the divine Ms. D chomp both the scenery and her hunky co-star, Sterling Hayden, in The Star.

Davis plays a washed-up movie celeb who tries, fails, and ultimately succeeds to transition from Hollywood stardom to “real life.” Part of her reality-check includes a brief stint behind the lingerie counter at the May Company on Crenshaw Blvd. She alienates every single customer, of course.

LACMA’s second feature, The Catered Affair, is the basis of a Harvey Fierstein musical now on Broadway. Film features Davis as a dumpy Bronx housewife inexplicably married to taxi driver Ernest Borgnine. This unlikely couple somehow spawns a fetching daughter in the form of the adorable (very young) Debbie Reynolds. When Young Missy becomes engaged, Mama Davis is determined to give her kid the wedding she herself never had — no matter who she mows down in the process. Paddy Cheyevsky’s marvelous script makes this b/w film from 1956 great viewing.