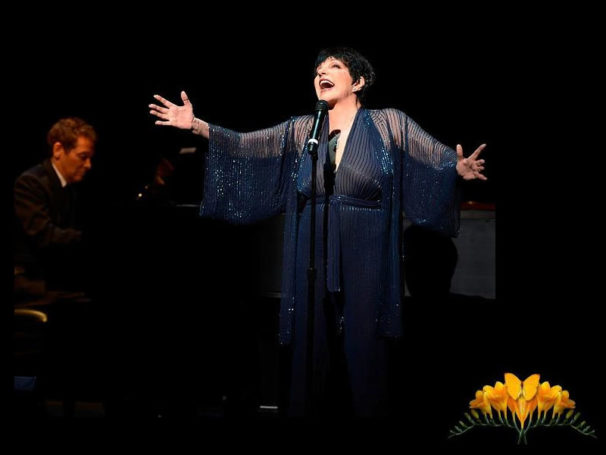 I never saw Judy Garland in performance. I was fifteen in 1969 when she last played in Copenhagen. Now I wish I had gone. But Saturday night, I got a frisson of that Garland feeling, when in a first, I attended Liza Minnelli’s show at Segerstrom Center for the Arts. The legendary singer delivered a tremendous concert, touching the humanity of all present. She sang and pattered, utterly at home, sharing the big Segerstrom stage with her good friend, Michael Feinstein. The chivalrous Feinstein had quadruple duty as a singer, jokester, accompanist, and diva-handler throughout the evening. 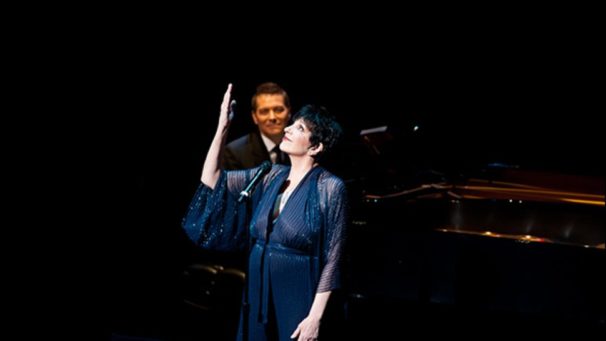 Dressed in signature black, and seated center stage due to a back injury, Minnelli made reference to her mother throughout the evening, calling her ‘mama.’ She even belted an anthem along that theme, “God Bless the Child,” which her mother, as well as Billie Holiday, had as a torch song. Garland was present not only in projected family photos and in Minnelli’s amusing memory of her mother’s direct advice, “Dance!” (as opposed to “Sing!) It was manifest in the peculiar adulation — that special bond with an audience — a rapt, holy attentiveness as she trod through her repertoire. It surfaced in her brilliant, skillful way of telling a tale through song that is a direct inheritance from Judy Garland.

Minnelli’s voice was uneven. She had some workarounds but even her gulping down Gatorade could not patch the missing bits. Similar to a potholed freeway, however, if you watched the bumps, it still got you there. She was utterly at home, magical, in her half-spoken rendition of Charles Aznavour’s “You’ve Let Yourself Go.” The chanteuse delivered the humorous patois tongue-in-cheek, as every lyric about decadence and decay could apply to herself as well. She honored her father, Vincente Minnelli, by singing “What Did I Have?” from On A Clear Day You Can See Forever, a movie he directed. She honored her godmother, Kay Thompson, in an upbeat number sung with Feinstein, who, absent Marvin Hamlisch, is our go-to expert on the American Songbook. Peerless when self-accompanying at the piano, left on his own, swinging before a three-piece back-up group, much less so. He could use some movement training. He can be dull to watch. And hear.

Minnelli hit the bullseye in recalling Cabaret lyricist Fred Ebb advising her: “You have a special gift for telling the truth in song. So find songs that are true for you … and sing them.”

Amen. A great life experience seeing Liza Minnelli in person. And good fun to bump into several Los Angeles friends who made the trek southward for the occasion – to a house that gets the top names and showcases them with glamour.