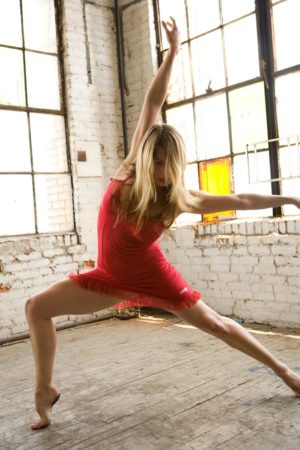 She’s part of a tribe of young dance makers who hop fluidly between entertainment hot-spots—Las Vegas, L.A.’s Staple Center, Broadway, and Hollywood. Clients include Katy Perry (at the Grammy Awards); George Lucas (in a Disney film); Spider-Man (vaulting above Broadway); and two darling daughters ages three and four. Relishing her return to the ballet world (now a leading commercial choreographer, she danced with the Alberta Ballet at 17), Cherice Barton joins an elite club—choreographers creating new works for Aspen Santa Fe Ballet. For a theme, she’s been cogitating on a commodity both rare and elusive.

“What is happiness?” queries Barton in Eudaemonia, her first serious choreographic foray onto the concert stage. She addresses this essentially spiritual question with the tools of her trade, the human body. The eldest of three dancing sisters (Aszure and Charissa complete the trio), the Ontario-born, Edmonton-raised choreographer spoke by phone during her recent Aspen residency.

“Happiness is huge as a concept—and the universal search for happiness provides infinite layers to be explored,” she said with a tinge of solemnity. 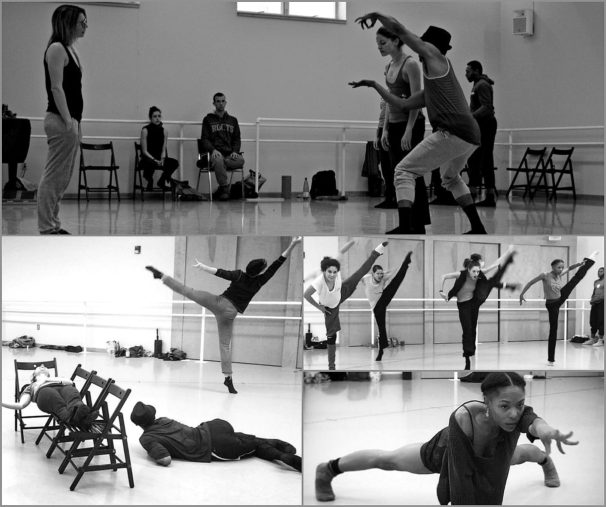 Eudaemonia is a co-commission by ASFB and the esteemed Valley Performing Arts Center, located in Los Angeles’s San Fernando Valley. VPAC executive director, Thor Steingraber, put ASFB directors Tom Mossbrucker and Jean-Philippe Malaty under tight constraints in selecting a choreographer. First, the work would have its world premiere Friday March 3, at VPAC, the frothy multi-arts theater located at Cal State, Northridge, where ASFB is dance company-in-residence. (This showcase represents the second of the residency’s three performances.)

Mossbrucker picked up the gauntlet with glee. “Thor asked us to select a Los Angeles-based choreographer.” he explained. “He also wanted someone working in commercial dance. We were delighted to discover Cherice, with her strong choreographic voice. She fits the bill on all counts.” 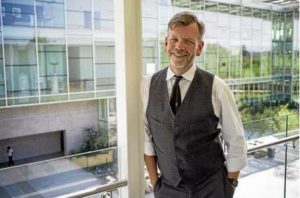 Steingraber, an impresario known for his eclectic taste, agreed. “There is something uniquely Hollywood about Cherice’s aesthetic and her approach to dance and performance,” he says. “It’s very much rooted in storytelling, embracing humor, and while unpacking a complex concept—the quest for happiness—it is also openly embracing of a kind of entertainment value.”

Entertainment is not a dirty word at Aspen Santa Fe Ballet. Said Mossbrucker, “We think it is quite interesting that she comes from the commercial [dance] world, where the emphasis is on accessibility, connection to the audience and thinking about who you are trying to reach.”

“In curating new works, we always consider how will our audience will feel. Like an outsider? Or will they feel like part of it. Cherice suits our aesthetic, and since she was originally part of the ballet world, we are cut from the same cloth.”

Barton’s journey toward Eudaemonia began last March with workshop time with the dancers. “When I returned to L.A. and revisited my workshopped choreography that one particular idea resonated and stuck. I love Jimmy Durante, and I’ve always wanted to pay tribute to the physical comedians like Donald O’Connor.”

Durante and singers Nick Cave and Warren Ellis deliver songbook-chestnuts like “Make Someone Happy” and “Smile (When Your Heart is Breaking)” courtesy of sound design by Jimmy Jurin (Barton’s husband). Barton’s young kids chime in with their own musings, as does Barton: “The score includes voicing fragments we all hear in our own heads, for example, “Stop beating yourself up,” “Be happy,” and “Don’t you realize how lucky you are?”

The theme felt timely. Barton explains, “I have had a really full dance career, as a director as a choreographer from Cirque to Broadway. I have a dream husband, two beautiful children; we moved from NY to LA with my two babies. It was time for me to look within; not that I was a depressed person but you get to a point where you cannot blame anymore that you don’t have that job, or that woman or man in your life, or that you don’t have the money you want. I spent a year doing that and realizing that happiness is fleeting. And it comes from within.”

Steingraber watched the dance take shape with amusement and some trepidation. “When Cherice told me her theme, I spent a few seconds worrying, like, that could be reductionist,” he said. “But instead, I was reminded that happiness is an incredibly complicated thing. And she demonstrates through movement just how complicated happiness is.”

Said Mossbrucker, “We’re very excited about Cherice.” Mossbrucker’s well-trod sense of adventure also kicked in. “We are the first to commission Cherice,” he said, adding, “she hasn’t [yet] worked in the concert dance world.”

For Barton, the gig has resulted in … well, happiness.

“I have been put in the fire, in the trenches of large-scale productions where there was so much pressure, so much money and so little time,” she said. “Working in a concert dance environment is irreplaceable: the simplicity of it, the beauty of having a studio, dancers, and time to make mistakes. Five weeks to create a new work—not being pulled by a producer or a director—is unheard of in the commercial world. Tom and J.P gave me a completely blank slate –that is, blank with a top-off of 25 minutes!”

Her joy approached rapture. “Returning to the ballet studio grounds me; it makes me feel most like myself,” said Barton, admitting, “It’s like going to church.”

This article was originally published by Aspen Santa Fe Ballet.