Director/auteur Ed Wood’s low-budget classic, Plan 9 From Outer Space, was loathed by critics upon release. It became a cult classic. The cast of the film included Maila Nurmi, credited as Vampira, and Bela Lugosi, who famously died during production and was replaced by Ed Wood’s chiropractor, Dr. Tom Mason. The making of Plan 9 From Outer Space was the subject of the 1994 Tim Burton film, Ed Wood.

The cult classic will enjoy a live reading at Bob Baker Marionette Theater by a group of actor including  Patton Oswalt, 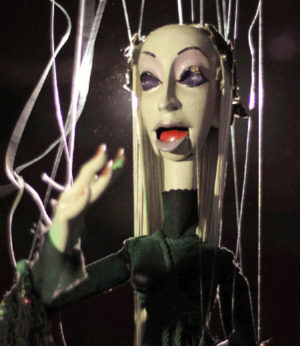 The evening will feature live musical accompaniment by Eban Schletter and will be embellished by highlights from the Bob Baker Marionette Theater’s own Halloween “Spooktacular.”

Created by Bob Baker and company in 1963 and running through the end of October, “Spooktacular” includes marionette UFO’s, aliens, robots, and even Vampira and Dracula.

Reception and cash bar at seven. Show at 8pm.