On 10 May 1961, Pan worked out an agreement with [“Cleopatra” producer Walter] Wanger in which he would provide choreography for the film at $2,000 a week, guaranteed for no less than fifteen consecutive weeks. In addition, he was guaranteed credit as “Choreography by Hermes Pan” on a separate card, given lodging and traveling expenses … and a weekly per diem of $300 for living expenses.

After spending a week researching Roman pageants and dances, Hermes was back in Wanger’s office where he was told to let his imagination run wild: “It was the biggest responsibility in my career,” Pan later explained. “They told me to spare no expense, but make it the most spectacular thing ever seen in movies … I asked for hundreds of horses, chariots, girls on elephants tossing coins, cobras, pole vaulters, and African warriors…” 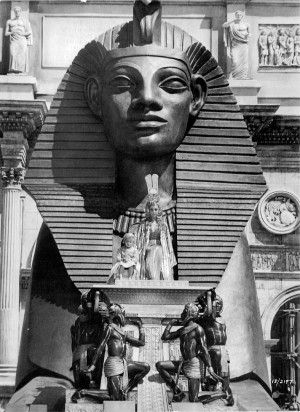 …Hermes had wanted to import a Watusi tribe of dancers seven feet tall from Uganda but hired West-Indian dancers instead when negotiations with the African tribe became overly complicated.

…On October 4 [year], Pan’s guaranteed fifteen weeks had run out and the sequence had yet to be filmed. Bad weather, illness and a variety of other problems (including Elizabeth Taylor’s scandalous affair with her costar, Richard Burton) that kept Cleopatra in the headlines contributed to the delay.

“We rehearsed for four months on that procession with Cleopatra into Rome. I had seventy-five black dancers, seventy-five white dancers, and animals. It was just a nightmare. But I finally just relaxed and enjoyed it because nothing you could do would hurry it up.”

… Finally on 13 April, with thousands of extras on hand to cheer, Cleopatra’s entrance between the paws of the Sphinx went before the cameras, nine months after rehearsals began. The rest of the lengthy procession sequence followed on 8 and 9 May.

… After eleven months in Rome, Hermes Pan was on his way back to [Los Angeles] at the beginning of June 1962. 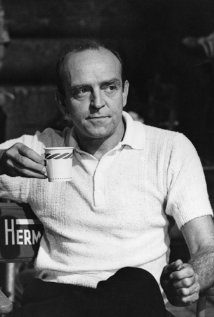 But (even) the man who choreographed “Top Hat,” “Swingtime,” and “Silk Stockings” was not immune to the diabolical cutters of 20th Century-Fox film corporation.

According to Franceschina, Pan was:

“… less pleased when he saw the finished picture since it chopped up the pageant he so carefully created, cutting out the Lighthouse at Alexandria, the human pyramid, the cobra sequence, the elephant girls, and the dwarfs on zebras — all the animal spectacle.”

One comment on “Cleopatra enters Rome, courtesy of Hermes Pan”