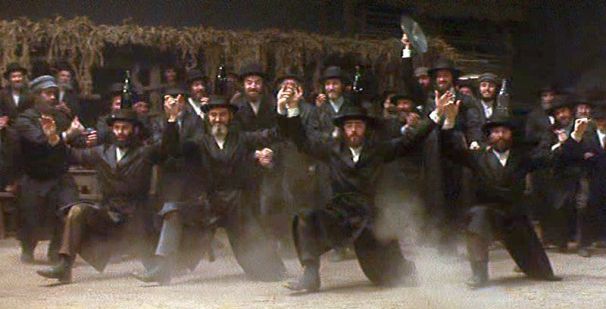 On view here Jerome Robbins’s great “bottle dance” rising in a cloud of soulful Jewish peasant-dust at the wedding ‘banquet’ of Tzeitel and Motel.

Apropos this brilliant dance number — for this dance critic the indelible imprint of director Norman Jewison’s surprisingly powerful visual recreation of the Eastern European world of the ‘shtetl’ Jews — a ‘bottle dance’ is apparently not authentic Jewish folk dance!

It was the conjuring of the Broadway play’s genius choreographer, Jerome Robbins, so reports this article in Smithsonian.com:

The famous “Bottle Dance” is not a traditional Jewish folk dance but the razzle-dazzle creation of director-choreographer Jerome Robbins. Robbins had previously staged West Side Story and Gypsy. He did “field research” for Fiddler by attending Orthodox Jewish weddings and festivals where he was thrilled with the men’s dancing.  He observed one man entertaining a crowd by tottering around with a bottle on his head pretending to be drunk. Robbins took that image and elaborated to create the Broadway showstopper featuring four dancers performing precise, electrifying moves.

Just further evidence of Robbin’s genius “borrowings”! Who can fault him? He always vastly improved upon his inspirations. More here on Robbin’s great success in controlling and protecting his creativity from Robert Simonson’s article in Playbill:

…The main reason Robbins’ work will not fade with time is because every time the show is remounted — and that’s dozens of times, throughout the U.S. and the world, every year — the same Robbins choreography is featured. 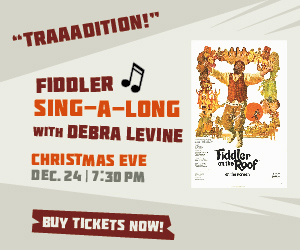 The rights to Fiddler on the Roof are controlled by Music Theatre International. We asked Jason Cocovinis, MTI director of marketing and promotions, if people who license the property are required to recreate Robbins’ work.

“Yes, there is indeed required choreography for performing Fiddler on the Roof,” said Cocovinis. “As part of the performance license, Fidder comes with a ‘Choreographic Guide’ which preserves choreographer-director Jerome Robbins’ original staging. The idea is that Jerome Robbins’ staging is integral to the fabric of the show and does not exist separately from the book, lyrics and score. Fiddler is one of the only MTI shows that has this requirement.

Robbins’ work is also preserved in other shows he worked on. According to Cocovinis, “For professional-level productions of West Side Story, many theatres are required to use the Robbins choreography, however it is not a requirement for amateur productions.”