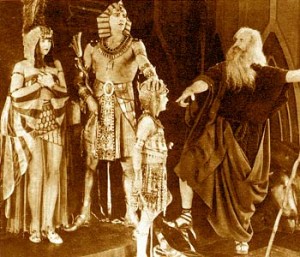 Tomorrow night, Wednesday December 4, 2013, a fantastic event: the 90th anniversary of Cecil B. DeMille’s THE TEN COMMANDMENTS, in a special screening accompanied by live music.

The screening will commemorate the 15th anniversary of the grand re-opening of the Egyptian Theatre.

Part of the Lasky-DeMille Centennial Celebration co-presented with Hollywood Heritage, with the support of the Cecil B. DeMille Foundation. 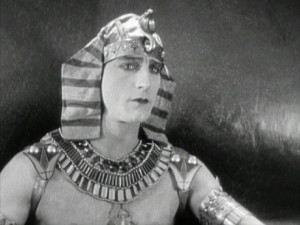 The American Cinematheque re-opened Grauman’s Egyptian Theatre on December 4, 1998 following an intensive 24-month restoration, rehabilitation, renovation and adaptive re-use of the legendary theatre where the first Hollywood movie premiere was held in 1922. 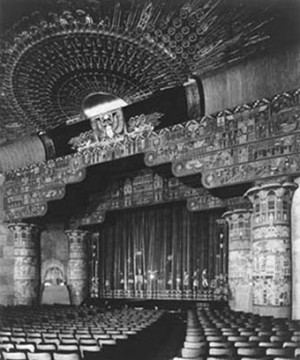 THE TEN COMMANDMENTS, accompanied by a live orchestra, just as Sid Grauman’s guests did 75 years-to-the-day, earlier.

Charlton Heston, Billy Barty, a live camel and a glittering vintage 1920s fashion parade were in the mix the night movies rolled once again on the Egyptian’s giant screen.

Now, fifteen years and thousands of movies later, we are pleased to once again celebrate Cecil B. DeMille’s 1923 THE TEN COMMANDMENTS at the Egyptian Theatre, where it premiered 90 years ago!.

A pre-screening reception with wine and cake will take place at 6:30PM in the Egyptian’s lobby.