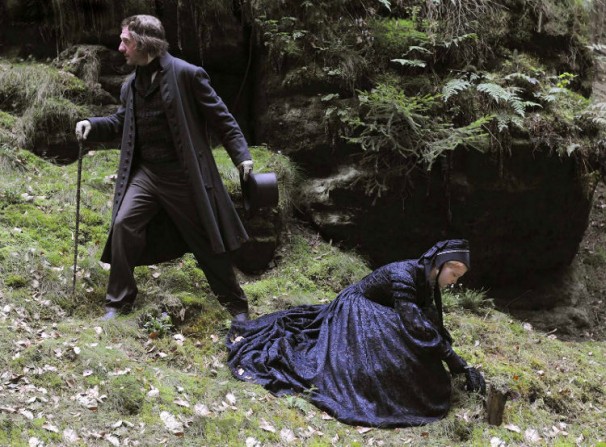 The Faust legend is so absorbed into the culture that any artist can make it their own. Alexander Sokurov, a director who always makes any story his own (“Mother and Son,” “Russian Ark,” “Alexandra”), took on the legend as the finale of a tetralogy on power which began in 1999 with the astonishing Hitler movie, “Moloch,” two years later with a ridiculously underseen Stalin movie, “Taurus,” and four years later—after the international triumph of “Russian Ark”—with an unexpectedly intimate portrait of Hirohito in “The Sun.”

The study of power has always been an interesting choice for Sokurov, who isn’t an overtly political artist and is the most dedicated to the traditions of Russian visual art and poetry since Tarkovsky. His movies play like dreams: he has crafted unique lenses that create weird, hallucinogenic distort; he’s among the last Russian directors to deploy extreme uses of post-dub sound (dialogue recorded in a studio after filming, once a standard of Soviet and Eastern European cinema); his pacing is sui generis, so that watching his movies can feel like swimming through (depending on the scene) mud or molasses.

“Faust” (at Laemmle’s Royal in West Los Angeles, Town Center 5 in Encino, Playhouse 7 in Pasadena) hinges on strange transformations, sudden encounters, immersion in the grotesque, and a journey of a desperate man (Johannes Zeiler’s affecting Heinrich Faust) drawn into a bargain with a creature who may or not be the devil. It suspends logic, and yet has a logic of its own, with hints of Lewis Carroll’s Alice down the rabbit hole, Kafka’s Joseph K. trapped in a maze, and a Wagnerian figure finding and losing his soul in the primordial woods.

That it took over two years to land on American screens says something about the American fear of foreign-language (especially Russian) movies. That it’s here for a brief time on screen is good, since many of Sokurov’s movies never get that far.