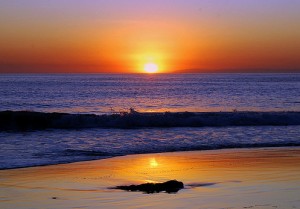 Then, two hours later, down came the magic curtain over the Pacific Ocean —  the California coastline town’s main attraction.

Aspen Santa Fe Ballet, the second contributor in a festival that also featured Parsons Dance, surfed smoothly through a program that opened with Jorma Elo’s “Overglow” to music by Mendelssohn and Beethoven — a work that has improved with viewing and performance. 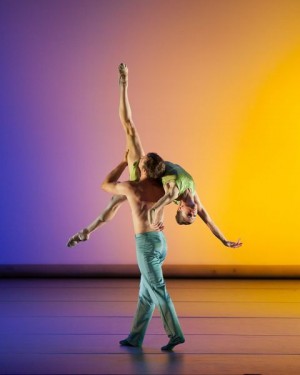 Nolan DeMarco McGahan, bare-chested, opened “Overglow” squiggling with requisite solemnity in a piece that swaps, with ease, between gravitas and romping. All eyes were on Katie Dehler, who brought to Elo’s sometimes kooky but always musical movement-chains her purity of spirit and precise execution. Dehler, the company’s reigning empress and a diva of contemporary classical choreography, will retire at the end of this season after 13 years with the company. 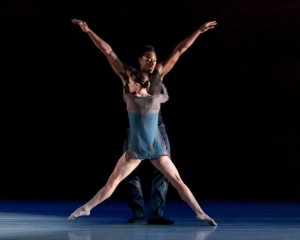 “Last,” set to music by Polish avant-garde composer Henryk Gorecki, hearkens, for this viewer, a town square in a Medieval village. The piece allows the ASFB dancers to feel silence and space. Choreographer Alejandro Cerrudo does not seem to fear those elements; indeed he finds opportunity there. He also inserts luscious long stretches and lunges, a beautiful contrast to the Elo work that preceded. In an extended duet, Joseph Watson partnered Dehler in a way that makes you want to exist forever, second by second, in real time. Indeed, “Last” packs a kind of existential profundity.

The wonderful cast of “Like A Samba” cut through Trey McIntyre’s charming and confident 1997 ballet (set to a suite Brazilian songs sung by Astrud Gilberto) like butter. Two of the company women pitched in beautifully: statuesque Samantha Klanac Campanile, both comely and comic in “The Girl from Ipanema,” and earthy Seia Rassenti, who seems born to bossa nova.