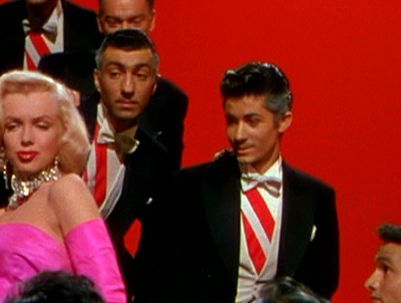 In the photo at right we see George, a young man with fake grey highlights spraypainted in his hair. He’s singing and dancing as one of Marilyn’s “ambassadors” in Jack Cole’s inimitable “Diamonds” sequence.

Little did Chakiris, Cole, or the world, know that he would burst forth with cinematic sizzle, seven years later, as Bernardo in “West Side Story,” garnering an Academy Award for Best Supporting Actor in 1962.

In “West Side,” Chakiris delivers on Jerome Robbins’s choreography beyond any dance maker’s wildest dreams. His dancing — and singing and acting — distinguish him from his many talented peers in the cast. He excels.

I, too, will participate in the “Gentlemen” program talking about the film’s choreographer, Jack Cole and presenting a Cole slideshow..

The program is sold out. There is a stand-by line, however. Stand by, as well, for photos to be posted on arts·meme thereafter.