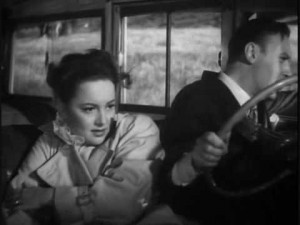 “Hold Back the Dawn” (1941) looks so good on the UCLA Film & Television Archive’s Mitchell Leisen retrospective roster. It opens a double-bill at the  Billy Wilder Theater this Friday night.

Charles Boyer plays a Hungarian hoofer stranded in Mexico who dupes an innocent schoolmarm (Olivia de Havilland in an Oscar-nominated performance) into an arranged marriage to get his American citizenship.

Leisen made substantial changes to Billy Wilder and Charles Brackett’s script, infuriating Wilder who later said the experience prompted him to become a director.

The resulting film, however, is a pitch perfect melodrama, according to our friends at the UCLA Film & Television Archive.

“Hold Back the Dawn” is paired at the screening with Carole Lombard and Fred McMurray in  “Swing High, Swing Low” (1937). The series has several more outings in the month of December. Recommended!