Ninety-year-old men in tights: “Robin Hood” at the Egyptian Theatre 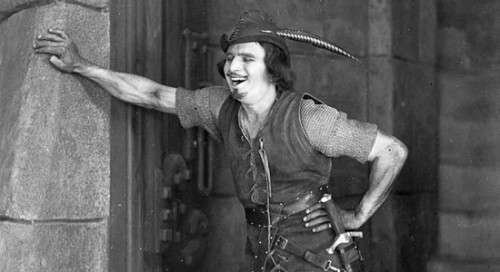 Ninety years ago, Douglas Fairbanks and wife Mary Pickford, joined by Charlie Chaplin, turned out for the premiere of Fairbanks’ swashbuckling adventure at their pal Sid Grauman’s new Hollywood movie palace. This evening went down in history as the very first Hollywood movie premiere.

The story of the medieval English hero who robs from the rich and gives to the poor gets its first Hollywood treatment with this immortal silent classic. Starring Douglas Fairbanks at his swashbuckling best, ROBIN HOOD was one of the most expensive movies of the 1920s, and it shows! A huge castle and the entire village of Nottingham were constructed for the filming.