Remnants of “The Players” found in anthropological dig of L.A. nightclub property 4 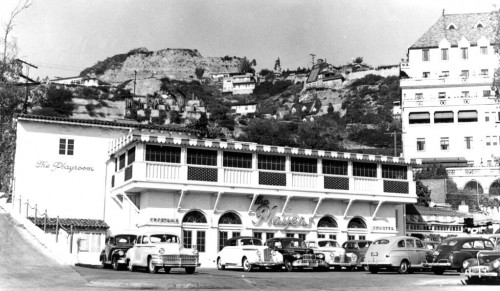 Our story concerns the film director Preston Sturges, whose great legacy is his canon of laugh-out-loud, politically tinged screwball comedies: “Sullivan’s Travels,” “The Palm Beach Story,” “The Lady Eve,” among them.

The former private home where Sturges’ bar/restaurant, The Players, once operated still stands at 8225 Sunset Boulevard. In the 1940s it formed a Triangle of Amazingness with neighbors Chateau Marmont (next door) and the Garden of Allah complex (caddy-corner).

Harry Morton— son of Hard Rock founder Peter Morton — soon will open the second L.A. outpost of his Mexican restaurant chain Pink Taco at 8225 Sunset Blvd. During the renovation of the property, which has been Miyagi’s, the Roxbury and Imperial Gardens, Morton, 30, peeled back enough layers to discover traces of the site’s original hotspot: Preston Sturges’ Players Club.

Run from 1940 to 1953, the multilevel supper club, frequented by Humphrey Bogart, Orson Welles and Howard Hughes, was a nexus of the Hollywood scene. 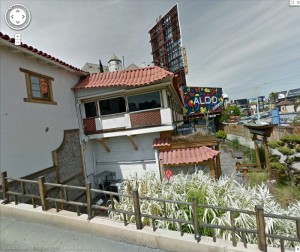 Morton dug out the entrance to the Players’ legendary VIP tryst tunnel — which connected to the adjacent Chateau Marmont and has long since been sealed by the city — as well as a revolving circular band stage buried beneath the dance floor that he hopes to restore in a later phase of the project.

“When I first got into this place, it had years of shit piled on top,” says Morton. “But when I stripped it all down, incredible things came to light.

The new club going in? “The Pink Taco.”  Ya’d think that a legendary watering hole frequented by Humphrey Bogart might inspire different treatment. Chasen’s, the Brown Derby, the Cocoanut Grove, Ciro’s — all gone. Musso’s on Hollywood Boulevard, imperturbable or so it seems, still operates.

Writer Martin Turnbull tells the story of The Players on his website.

4 thoughts on “Remnants of “The Players” found in anthropological dig of L.A. nightclub property”