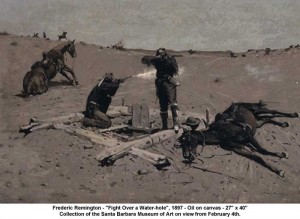 Heading to Santa Barbara for a writer’s retreat, we are delighted that our visit to the Pearl on the Pacific coincides with the opening of a “golden oldies” show at the Santa Barbara Museum of Art.

The show, “Scenery, Story, Spirit: American Painting and Sculpture from the Santa Barbara Museum of Art,” is a tour of the museums gems from its vaults —  examples of American art from the 19th and early 20th centuries.

Between the 1830s and the end of WWI, American art came into its own, the Museum reminds us·. Sixty pieces spanning majestic Hudson River School paintings of Thomas Cole, John Kensett, and Albert Bierstadt to the gritty urban realism of Robert Henri and John Sloan figure in the show.