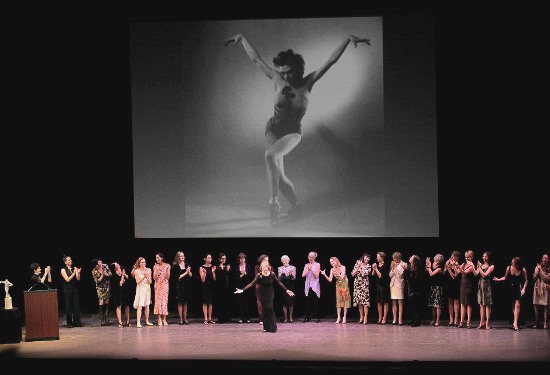 Included was Los Angeles’ own Yvonne Mounsey, 92, who danced with City Ballet from 1949 – 1958, and remembers Robbins as follows:

YVONNE MOUNSEY: I loved Jerry — we had a very good relationship and he liked me! After he had done The Cage and given me the role of the Queen, he started calling me “Queenie”. My first ballet with Jerry was Age of Anxiety in which I had a small role. In rehearsal, I had to walk on stage and take my place which I did. Jerry turned to me and said, “What do you think you’re doing Yvonne…Swan Lake?!” Jerry loved me in The Concert. The pianist was there playing Chopin’s Prelude and I was the wife. He laughed every time I came on and would say, “Do it again!”

A bountiful bevy of Balanchine (and Robbins!) beauties.

Congratulations to each and every one.