You meet a great mix of people in L.A. Dare I say, ‘fruits and nuts’? It’s all the more fun when the chatter happens at a garden party like the one Bill Stern convened in the soft air ricocheting ’round  Malibu’s Carbon Canyon Sunday afternoon. 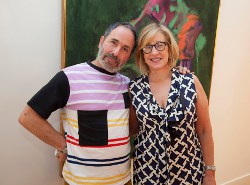 Stern’s annual fundraiser for the Museum of California Design is a kind of go-to event for L.A.’s design and architecture crowd. The do, this year honoring furniture designer Peter Shire, was generously hosted by Cecilia Dan, whose swank Frank Israel-designed modern home nestles happily in the scrub-brushy hills of Malibu.

The air wafted, the canapes circulated, and the Pacific Ocean glistened from below. Sunday, the sea was turquoise and flat. All was well with the world. Lucky us.

Amongst the party’s many interesting creative folk was a strikingly handsome, very nice chap named Emilio, born in the Caribbean, in Guyana, to a Catholic family.  It’s odd, given his background, how the twists and turns of world events have affected his career. Explained Emilio: 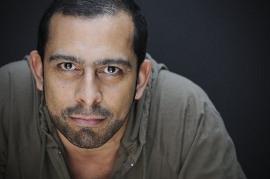 My background is in theater, playing Shakespeare for years, touring the world.

Moving here a year and a half ago, I expected more of the same. Instead, I’m doing funny Indians. You know, broad comedic Indian roles. I played an Indian pharmacist in a “Sit ‘n Sleep” commercial and the father of an Indian family in the closing segment of “90210.”

A crazy world, with crazy roles to play, people to meet, and lives to lead …