Not just because he’s a friend of arts•meme, and a fellow toiler in the bowels of Brigham Young University’s Harold B. Lee Library, the resting place of the massive Cecil B. DeMille archives…

The well regarded film historian, Scott Eyman (Lion of Hollywood: The Life and Legend of Louis B. Mayer, Print the Legend: The Life and Times of John Ford, Ernst Lubitsch: Laughter in Paradise), receives a classy accolade: the Richard Wall Memorial Award for his  Cecil B. DeMille biography published last year.

That’s Empire of Dreams: The Epic Life of Cecil B. DeMille, by Scott Eyman (Simon & Schuster, 2010). 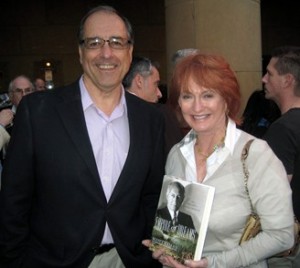 This honor certainly extends to Jim d’Arc. And what a thrill for Cecilia DeMille Presley, the director’s grand daughter, who supported Eyman in his efforts.

The Richard Wall Memorial Award, established in 1973, honors an English-language book of exceptional scholarship in the field of recorded performance published or distributed in the United States during the previous calendar year. Formerly known as the Theatre Library Association Award, the prize was renamed in 2010 to honor the memory of the late Richard Wall, longtime TLA member and Book Awards Chair.