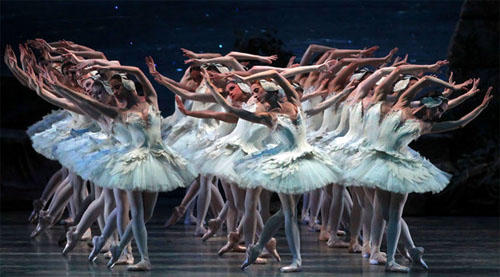 The survival, let alone the mystique, of the ballet, Swan Lake, is a phenomenon few would have predicted at its premiere in Moscow in 1877 — which was a flop. Wikipedia notes [with added commentary]:

The premiere of Swan Lake on March 4, 1877, was given as a benefit performance for the ballerina Pelageya Karpakova who performed the role of Odette, with the Bolshoi Theatre’s Premiere Danseur Victor Gillert as Prince Siegfried. Karpakova likely also danced the part Odile, although it is not known for certain.

Karpakov replaces Sobeshchanskaya – the first bad sign
The Russian ballerina Anna Sobeshchanskaya—for whom the original (1877) rôle of Odette was intended—was pulled from the premiere performance when a governing official in Moscow complained about her, stating that she had accepted several pieces of expensive jewelry from him, only to then marry a fellow danseur and sell the pieces for cash.

That nasty music!The premiere was not well-received, with near unanimous criticism concerning the dancers, orchestra, and décor. Unfortunately Tchaikovsky’s masterful score was lost in the debacle of the poor production, and though there were a few critics who recognized its virtues, most considered it to be far too complicated for ballet. Critics considered Tchaikovsky’s music “too noisy, too ‘Wagnerian‘ and too symphonic”.

What do Germans know about ballet, anyway?
The German origins of the Swan Lake story were “treated with suspicion while the tale itself was regarded as ‘stupid’ with unpronouncable surnames for its characters”.

As though Tchaikovsky didn’t have enough problems …
“The poverty of the production, meaning the décor and costumes, the absence of outstanding performers, the Balletmaster’s weakness of imagination, and, finally, the orchestra…all of this together permitted (Tchaikovsky) with good reason to cast the blame for the failure on others.”
—Modest Tchaikovsky, brother of the composer.

Rübsam’s course explores why the Tale of the Big Bird is the most enduring and beloved of classical ballets. In ten sessions, he’ll shed light on the ballet’s production history, analyze Tchaikovsky’s 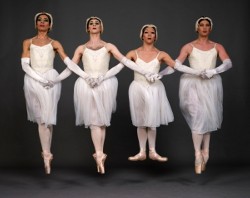 score, and interview famous Swan Queens of today and yesteryear to help illuminate the legendary dual role of good and evil, Odette/Odile—including the challenge of transformation from white to black swan.

The Swan Lake survey course is inspired only in part by the widespread popularity of the Darren Aronofsky film, “Black Swan.” To gauge Rübsam’s critical response to the Hollywood blockbuster, just note his preferred means of referring to the film: by its initials, “B.S.”