blue13’s “Into the Bollywoods” @ the Ford Amphitheatre this weekend

Sure to be eye-popping, noisy, and fun, McDaniel’s Into The Bollywoods (with apologies to Sondheim, we’re certain) has its premiere on Friday night. It’s blue13‘s fourth return booking at the outdoor venue, a spot where people have more per capita fun than any theater in town. It’s hard to miss in the Ford’s cool evening air, and Into the Bollywoods promises to bridge not only the Cahuenga Gap, but more importantly, the grown-up/kid gap.

“Well, I’m such a little kid. I’ve always been obsessed with childhood stories, themes of fairy tales, and I love telling a story through dance,” she said. “Naturally, Bollywood already does that, they’re lip syncing in line with a theme, mixing music, dance, and a narrative.” 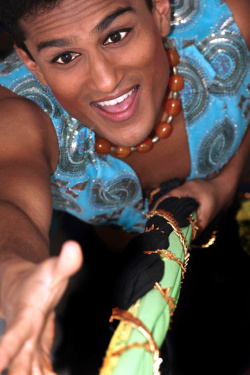 “We’ve got a wealth of music,” assures McDaniel, a film and dance video veteran whose signature teaching method is called Bollywood Bhangra Beats™.

blue13 is well networked in the Indian community which always comes out in support. But McDaniel wants to extend her reach: “I really want dancers to come see this piece. It has such a diverse cast, not just from ethnic background, 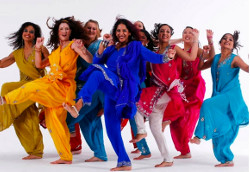 but because it weaves in so much technique. There’s some beautiful triple pirouettes, a body percussion piece, all kinds of genres, tied together by this Bollywood umbrella.”

Assembling an outdoor performance for a cast of 22 requires moxie, but McDaniel is known for her surplus of energy. With a laugh, she admits, “One of my students asked me if I am a robot!”