Born in a trunk in 1918, the still funny and alert actress was the daughter of the actors Robert McKenzie and Eva McKenzie. All the kids in this hard working Los Angeles family acted in motion pictures.

McKenzie appeared in a supporting role (um, she was four years old!) in “Abraham Lincoln” (1924), an ambitious biopic that was the warm-up film to “Covered Wagon.” “Abe” exists in a condensed format of sequences; it was excerpted in the 1930s for a 30 minute educational short. Alas, McKenzie’s scenes hit the cutting room floor. 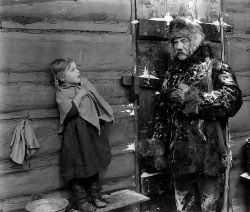 “Everyone in the family was working. We lived on North Kenmore. I was home alone one day. I got a call. The call was from the studio.

I remember taking my make-up case and waiting [on the porch] for the studio to send a car for me. I didn’t think anything of it at the time. You get the call, you go to work.

“For a child, they would explain to us exactly; they told us what we would be feeling. It seemed perfectly natural. It was the family business.

“I was in a movie with a comedian. They told me, no matter what he does, don’t you laugh! I said, ‘I’ll try not to,’ to which my mother replied, ‘You’ll try not to? What are you, a little amateur?’ “

Haberkamp noted, “I got a call a few weeks ago, my colleague said, ‘You may want to talk to this woman, Randy. She says she was in “Abraham Lincoln.”‘

“Those are the calls you gotta take!” said Haberkamp.