In no time, the choreographer has introduced twelve bodies on stage and it’s pulsating, rocking, and coming at you so hard you have to stop breathing to take it all in.

I saw it perhaps eight times and never failed to be mesmerized by its syncopated, aerobic body logic. And the Washington dancers, on whom Harris created the ecstatic “Reign,” own it, work it so hard; they kill in this piece. 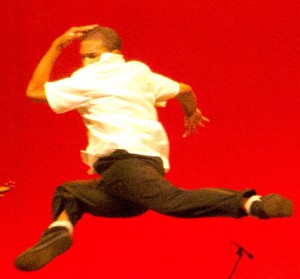 Henan Province is not Beijing, Shanghai or Guangzhou; it’s the hinterland, an interior place not fully participating in 21st century modernity. You couldn’t imagine a less likely audience for the Guggenheim and Alpert Award-winning dance maker’s “Reign.” And yet, audiences in the culturally isolated Henan, considered one of China’s poorest provinces, stepped up, watching earnestly despite music that must have been fingernail on chalkboard to them.

“Reign,” persists a full fifteen minutes, smoky, rambling, way-cool and so infectiously funky that if you can resist the pull of James “JT” Wilconson’s gospel-house mix, it means that you’re dead.

The work illuminates Harris’s genius in moving vernacular dance from club to concert stage, and in unifying the black church’s holy roller past with a mega super hip nowness. What a wonderful talent. 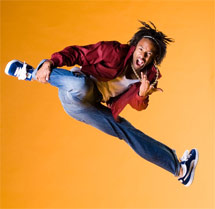 Rocking, knocking knees; backward, jagged kung-fu kicks; low-legged duck walks; hands puncturing the air with splayed fingers; arms broken at the elbow; falls to the stage caught by one strong hand — all of this wicked fresh movement pours forth from “Reign.”

Then comes a new message: ‘I can go to the rock of my maker…’ The dance promises, through the vibrant body, a place of solace, comfort, safety, certitude. What on earth the Chinese got from this is anyone’s guess. I watched thousands of them watching “Reign.” Most looked in total shock.