A pretty decent selection of late-night movies — just what you need when you are strangely full of energy from about one till four am — is getting me through my post-China jet lag. 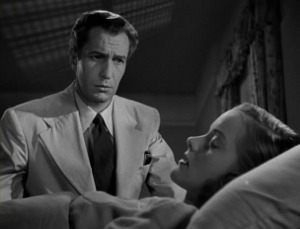 Last night I whiled away the hours with “Shock,” a 1946 film noir starring horror guy Vincent Price as a dicey and murderous San Francisco psychiatrist.

The sight of Vincent  clubbing his wife over the head with a brass candlestick holder puts Anabel Shaw (the actress died in Santa Barbara only last year) into a state of bug-eyed shock, thus the movie title.

This film: a perfect match for the 3 kilowatts of brain power I could muster at that hour.

Seeing Price in “Shock” reminded me that I’m due to visit the newly reopened Vincent Price Museum in East Los Angeles, on the campus of East Los Angeles College — corner of Avenida Cesar Chavez and Collegian Avenue.

Vincent Price Art Museum (VPAM) was founded in 1957 with an initial gift of nearly 100 artworks from Mr. Price’s personal collection. Since then, the Museum’s collection has grown to nearly 9,000 objects.