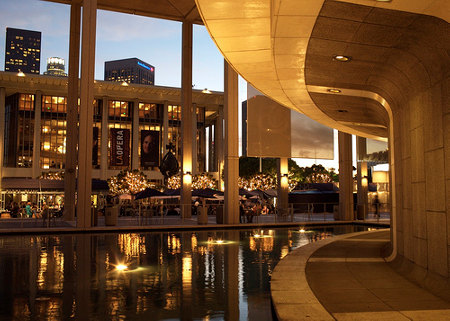 The choreographer whose troupe, the Mark Morris Dance Group, opened a four-day run last night at the Music Center, shared his affection for the theater when I interviewed him in 2007:

“It’s fabulous to be performing at the Dorothy Chandler Pavilion,” he told me then. “I just love the mid-century-modern touches,” he said, indicating the gold bric-a-brac tacked on the board room wall.

Before retiring as an idiosyncratic dancer, Morris performed in the world’s great opera house and theaters. “Every house has its own magic. It’s a show biz thing,” he explained. “I was thrilled to dance at the Met, La Scala in Milan, Théâtre des Champs-Élysées in Paris where the Stravinsky riot broke out in 1913. Even the tiny stage at Jacob’s Pillow, brimming with modern-dance history, was an honor to step foot on.

“It reminds me of a piece I made for the Joffrey Ballet in 1986. I flew out to L.A. to have lunch with Robert Joffrey. That was twenty years ago, before he passed away. My ballet was called “Esteemed Guests,” which caused [New Yorker magazine dance critic] Arlene Croce, to write, “Who doles out the names for these things?”

Skipping a beat to ponder the critique, Morris blurted out: “It’s a very good name! I’d use it again!”

Read my review of Mark Morris Dance Group in the Los Angeles Times.