What a piece of work is Hamlet! 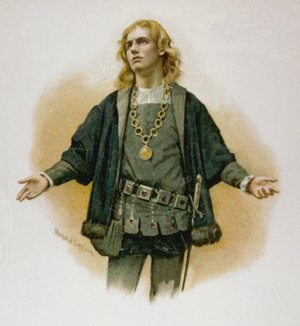 I am attending “The Trial of Hamlet” this evening to determine the competency of the defendant to stand trial for the murder of Polonius.

[Justice Kennedy was nominated to the Court by President Reagan, taking his seat February 18, 1988.]

To recount for you Hamlet’s evil deed, during a heated argument with his mother in her bedchamber, the unhappy lad hears a voice from behind an arras, or curtain, geez, one of those places people lurk behind in plays to eavesdrop. Drawing his dagger, and without identifying the source, he stabs through the fabric.

Polonius, his uncle Claudius and (new) stepdad’s consigliere, tumbles forth, bloodied and most dead (Act 3, Scene 4). Yow! Murder, he wrote.

The Depressed Dane has spent much of the play whinging about his bad mood and ACTING OUT!  Hey, I do this too, but rarely as follows:

I have of late,—but wherefore I know not,—lost all my mirth, forgone all custom of exercises; and indeed, it goes so heavily with my disposition that this goodly frame, the earth, seems to me a sterile promontory; this most excellent canopy, the air, look you, this brave o’erhanging firmament, this majestical roof fretted with golden fire,—why, it appears no other thing to me than a foul and pestilent congregation of vapours.

Was Ham too down to know right from wrong?

The jury of twelve who will determine His Princely Competency includes the two actors, Helen Hunt and Tom Irwin, who  both recently appeared in “Much Ado About Nothing.” Joining the thespian jurors, Caroline Bailey, with Gallo Family Wines; real estate developer Larry Silverton; Richard Morganstern, former managing partner of a Beverly Hills-based intellectual property and business litigation firm, and others.