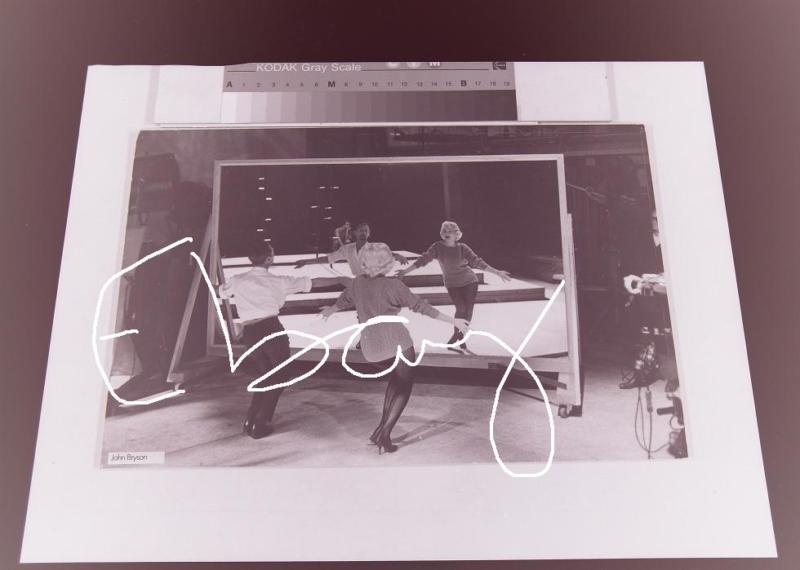 In the photo at left (yes, from an ebay sale) choreographer Jack Cole rehearses Marilyn Monroe in “My Heart Belongs to Daddy” on the set of Let’s Make Love” (1960)

If you examine Cole’s head and shoulders, and Marilyn’s, you’ll see the difference between a trained dancer and not.

The photo shows Cole’s much vaunted skill to “become” the woman on whom he was choreographing. It’s fabulous how he juts out his hip; it’s a totally womanish movement created for a dancer with an infamous derriere. Cole otherwise didn’t use the hips in this soft manner, he preferred bump and grind … hard, percussive actions. Think Gwen Verdon. 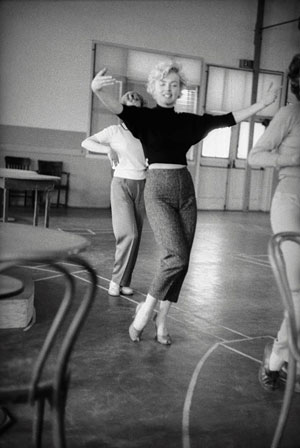 One can guess that last minute run-throughs were necessary since, unlike her painstaking voluntary rehearsing for “‘Gentlemen Prefer Blondes,”  Monroe totally lapsed and flaked out on rehearsals for this film.

For three weeks, Cole waited for her day after day in a rented Carnegie Hall studio in New York getting more and more pissed off.

To the right, Marilyn rehearses with Cole’s teaching assistant, Verdon, behind her. That was in 1954, better days for the actress.

I just watched “Let’s Make Love,” a grippingly terrible movie; George Cukor really lost his touch on that one.

Only Yves Montand escapes the torpor in one piece. But, off the set, he had a blonde distraction . . .