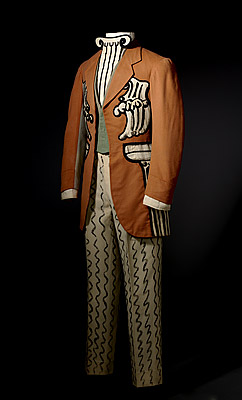 The “Le Bal” costumes are part of an exhibit now on in Canberra of 140 vivid and innovative costumes from 34 Ballets Russes productions, dating from 1909 to 1939.

We met Dr. Bell at an April 2009 Boston University convocation celebrating the 100th anniversary of the Ballets Russes premiere season in Paris in 1909. Since then, he curated the costume show.

Le Bal (1929), a ballet in one act and two scenes, one of Balanchine’s  works for impresario Serge Diaghilev [please read comment below]. 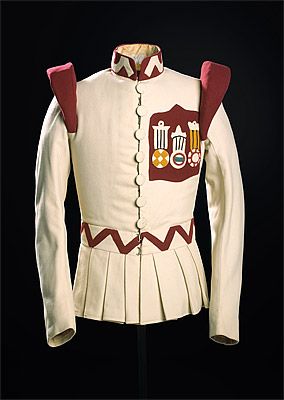 [For “Le Bal” scenario, mouse over, or click on, photo at left.]

Italian Surrealist painter Giorgio de Chirico‘s commission from Diaghilev for Le Bal was based on the masked ball theme. The story’s dreamlike quality explored the nature of duplicity, ambiguity and deception. De Chirico drew upon his interest in desolate, unpeopled built spaces for his design of the ballroom — an austere room with exaggerated cornices, strangely proportioned openings and scattered with fragments of classical architecture.

This theme is echoed in the costumes, rendering each performer a movable element of an architectural ensemble. Jackets and trousers became pilasters and columns, shirts and dresses roughly sketched examples of the classical orders. Their complexity and weight was further laden with stuccoed wigs for the dancers, adding to an air of antiquity even though Balanchine’s choreography was light and acrobatic. 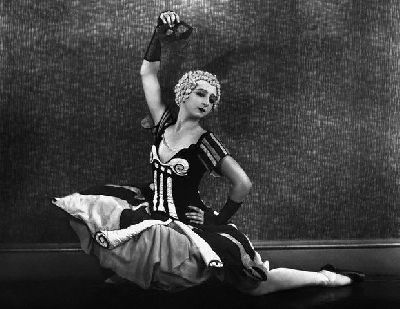 de Chirico’s work for Le Bal is a vivid example of the Italian Novecento design movement that returned classicism to mainstream taste during the 1920s. It also reflected Diaghilev’s lifelong admiration for Italian history, particularly poignant as his last production before his death in Venice one month after the closure of the ballet’s London season.

Dr. Bell will give a talk about his show February 1. But you must go to Canberra to hear it. Viewable on the exhibit’s outstanding interactive website are the show’s many other original Ballets Russes costumes.

Ballets Russes: The Art of Costume | National Gallery of Australia | thru March 21 2011