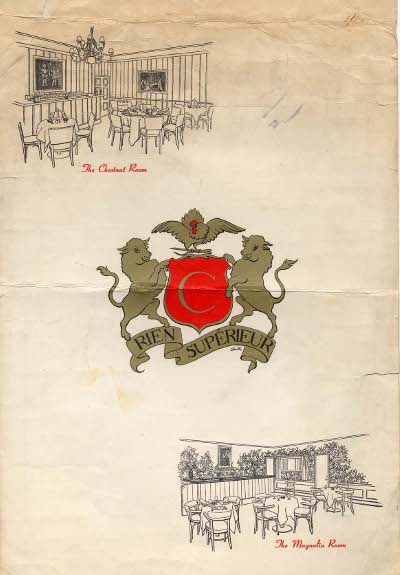 Urban legend has it that early in their ten-year working relationship, Cowan took his pretty blond protegee to dinner at the legendary L.A. celeb winery-dinery, Chasen’s.

There Cowan purportedly told her, “You don’t have a great last name,” and so she changed it.

That’s how, in this version of the story, the New Yorker Veronica Sue Cohen emerged onto Beverly Boulevard one evening with a California-friendly name. She didn’t look far for inspiration.

Now a supermarket, the white-brick-and-clapboard structure replaced the original modest chili and bbq shack begun in 1936. Straddling the border of West Hollywood and Bev Hills, Chasen’s by the 1950s was the watering hole of choice for high-rung Hollywood names like Sinatra, Reagan, Cagney, Liz, and Groucho. 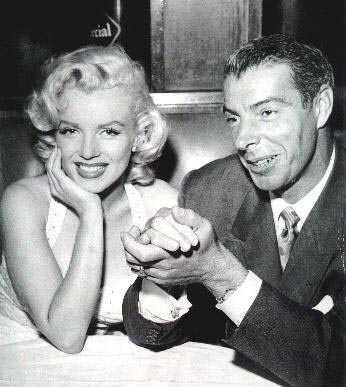 Here, snuggling, to the envy of all, in a red leather banquette on June 26, 1953, Joe DiMaggio held a hand that some hours earlier had plunged into the cold wet sidewalk cement outside Grauman’s Chinese Theater. The imprinting of tootsies and paws by Marilyn and her “Gentlemen Prefer Blondes” co-star Jane Russell was an established, hokey L.A. publicity ritual that may have enthralled the future Ms. Chasen, then a seven-year-old New Yorker. Surely it must have captured her movie-loving mom.

I once attended a Christmas party at Chasen’s and had a ball. The place — a confusing blend of hoity-toity and casual — was high-California royale. The menu cover, posted above, typifies Chasen’s cultural mash-up: a coat of arms labeled, in terrible French, “Rien Superior” (“nothing better”).

What the heck did Chasen’s, nestled in a white building right out of Gone With the Wind, have to do with anything French? 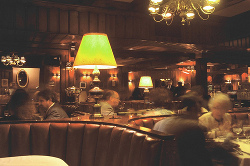 Abandoned by the onslaught of “California cuisine” and a new gen of Hollywood royalty that preferred Spago’s, Chasen’s limped to a close in 1995. But its namesake, Ms. Chasen, survived fifteen years more, departing in a hail of bullets on November 15, 2010. The adopted daughter of Hollywood died, suitably, on Sunset Boulevard.

Click here for Chasen’s menu dated 1955, very close to what Joe and Marilyn ordered from.