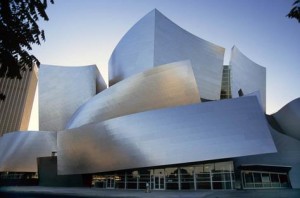 The music mavens in our group at the NEA Arts Journalism Institute for Classical Music & Opera were levitating into outer space after meeting a huge hero: The New Yorker‘s music critic, Alex Ross, the author of The Rest is Noise: Listening to the Twentieth Century (2007) and Listen to This (2010).

In a chat between writers, Ross told us that in his travels around the country he has developed affection for our nation’s great concert halls:

“I love Carnegie Hall. It’s the sound — it’s magical. Avery Fisher lacks a seductive aspect, but you can make it work. I love Symphony Hall in Boston, Severance Hall (Cleveland), and Orchestra Hall in Chicago,” he rattled them off. “And (I like very much) Seattle’s hall.”

Disney Hall? What’s not to love? Ross noted: “I like to be inside the sound. The closer I am to the center of the sound, the happier I am.”

I asked him if he had tested the options in a house that boasts no bad seats. “Yes,” he replied, “I sat in that top far row in Disney Hall. It was amazing, with an amazing view.”

I think by this he means the cat-bird seats situated very high up, tucked in a corner behind the stage. There are two of them, little balcony-pockets that are very private, and lend a steep downward view onto the stage.

This conversation happened a month ago in New York. Just recently, Anya Grundmann, one of the Institute’s intrepid leaders, posted some of Alex Ross’s favorite tunes on the website she oversees for NPR Music. Here’s an excerpt:

“When I think of the music that I love the most — to make a quick and off-the-cuff list, Bach‘s Mass in B Minor, Schubert‘s String Quintet, Brahms‘s Intermezzos Opus 117, Messiaen‘s Quartet for the End of Time, Bob Dylan‘s “Sad-Eyed Lady of the Lowlands,” Nina Simone singing “Strange Fruit,” Radiohead‘s Kid A, Bjork‘s Vespertine, John Adams‘s Nixon in

China — I don’t have the slightest idea what they may have in common. Some mixture of earthy impulses and intellectual complexity seems important, but I can’t quantify it. My definition of great music is music that makes me stop thinking about any other kind.”