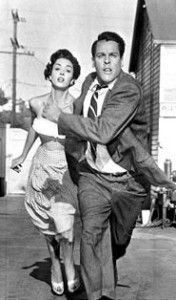 I met Kevin McCarthy through our mutual friend, actor James Karen; we sometimes all had lunch at Musso & Frank’s. And it turned out that Kevin lived a few blocks from me in Sherman Oaks, so I happily chauffeured him on occasion, especially the time he came onto a film I was co-producing.

As a follow-up to his cult hit “The Lost Skeleton Of Cadavra,” Larry Blamire was making a more ambitious parody called “Trail Of The Screaming Forehead,” best described as Invasion Of The Body Snatchers had it been directed by Douglas Sirk (only funny, of course). It obviously seemed ripe for a McCarthy cameo.

But Larry demurred, correctly fearing it would take viewers out of the movie. When an actor dropped out, I recommended Jimmy [Karen] take his place, and Larry promptly signed him up. And naturally, Jimmy told Kevin about the film, and just as naturally, Kevin wanted to be in it. Now we had a problem.

I eventually came up with a solution: Why not put him in the cookie? (For the uninitiated, that’s a bonus scene that comes after the closing credits; it’s called a cookie because it’s a reward for people who stay to the end.) Since the movie was essentially over, it wouldn’t matter if we winked at the audience. Larry agreed, and thus Kevin was in.

The scene was set in a bar, and I coaxed the legendary Dick Miller out of semi-retirement to play the bartender. (You can’t do a ‘50s-style sci-fi film without Dick Miller.) Though these two old chums were veterans of many Joe Dante pictures, they had never shared any scenes, so this would be the first (and alas, only) time they would actually have an on-screen conversation. 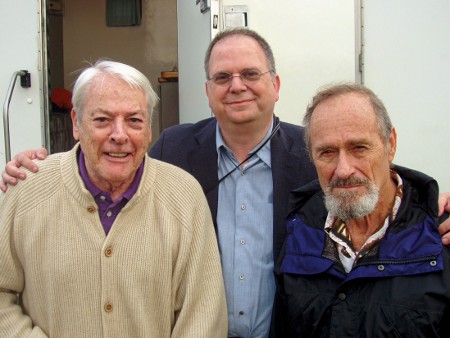 The place was abuzz when Kevin came in; so many photos were being snapped that the 1st assistant director finally had to yell at everyone to stop so they could finish lighting the set. (The photo at left was taken moments earlier outside.) The cameras rolled, they did a few takes, hilariously ad-libbing new dialogue each time, and then finally, sadly, Larry decided he had what he needed. Cheers rang out, and Kevin left to a hero’s farewell.

About a year or two ago, age finally caught up with Kevin; his mind was as sharp as ever, but his eyes, ears and legs began to let him down. Still, he was always Kevin, ready with a quip or an anecdote, just happy to be there, no matter where “there” was. He remained so until the end. We should all reach 96, and we should all do so with his uncommon grace and wit.